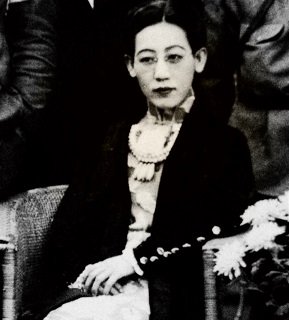 She was born into Chinese royalty in 1907, as Princess Xianyhu of the Aisin Gioro family, rulers of Imperial China. When she was only four years old her family fell from power as the Empire was dissolved, and a Republic was declared in its place. The Emperor was only a child at the time, but his mother agreed as his regent to abdicate. In return for this the revolutionaries agreed to spare the lives of the Imperial family, including Xianyhu. The family were dispossessed, and neighbouring powers were quick to sniff a possible advantage in this. As a result Xianyhu’s father, Prince Su, was approached by a Japanese intelligence agent named Naniwa Kawashima. He persuaded Su to give him Xianyhu to raise in 1915, when she was eight years old. Naniwa renamed her Yoshiko and took her back to Tokyo to raise as his daughter.

Life for young Yoshiko was hardly idyllic. Her father died in 1921, having never again seen the daughter he gave up, and Yoshiko’s mother committed suicide at his death. Her adopted father Naniwa, meanwhile, harbored some very unfatherly feelings towards her. He began dropping hints to his friends that he was considering marrying her, and became intensely jealous (and even violent) if he thought she was flirting with another man. Her only escape was into her education, which included training in Japanese martial arts such as Kendo and Judo as well as a broad grounding in the social sciences. Later in life she would reveal that her step-father had raped her when she was seventeen, and this prompted her to leave home. She cut her hair short and began dressing as a man, disappearing into Tokyo’s bohemian underground. There are rumours that she took more than a few rich lovers (both male and female) to support herself during this wild period, but the details remain hazy up until 1927, when her loyalties pulled her back into the world of politics in the traditional manner for princesses. Her brother and step-father had arranged a marriage for her.

It’s around this time that Yoshiko took the Chinese “courtesy name” of Dongzhen, or “Eastern Jewel”. Under this name she married into the family of a general tied to the Mongolian independence movement. Most sources give her husband as “Ganjuurjab, the son of Inner Mongolian Army General Jengjuurjab”, but this appears confused on several levels, not least because she was married two years before the “Inner Mongolian Army” was formed. “General Jengjuurjab” does not appear to have had much success, as his association with Yoshiko (the name she is usually referred to by) is by far the most prominent fact in his history. It’s probable that this manoeuvring was all part of the lead up to the formation ten years later of Mengjiang, an “independent” Mongolian state that was a puppet of Japan. Regardless, Yoshiko’s marriage was as short-lived as her father-in-law’s apparently overreaching ambitions, and she was divorced in 1929, still only 22 years old.

The newly single Yoshiko moved to Shanghai, where she lived in the foreigner’s quarter and became involved in the murky politics and espionage of the region. She still appeared to feel loyalty to Japan, and a dislike of the central Chinese Republican government that had cheated her of her birthright. Her contacts with the Mongolians remained active, and she also had hooks into her own royal family – most especially her cousin Puyi, the child emperor who had been removed from his throne. She became the lover of Ryuichi Tanaka, a Japanese intelligence officer. [1] In 1932, anti-Japanese demonstrations and violence (some genuine, some incited by Japanese agents) were seized on by the Japanese army as a justification for invading Shanghai, in what became known as the Shanghai Incident. In the end they were driven back, mostly due to the unexpected loyalty and patriotism of the semi-mercenary 19th Route Army though the assassination of the Japanese general leading the invasion by a Korean nationalist also contributed. As a result of this Japanese military personnel such as Tanaka were no longer welcome in the city. In his absence Yoshiko began directly reporting to General Kenji Doihara, a member of the “Eleven Reliables” military clique that were doing their best to drive Japan into war. A genuine Imperial Chinese Princess with links to the Mongolian independence movement was exactly the tool the general needed.

The previous year the Japanese had invaded Manchuria, claiming to be securing the region’s independence from the rest of China. With Yoshiko’s influence, they were able to persuade Puyi to become the head of this new puppet state, which was named Manchuko. This was a clear move to position the new state as the true heirs to the Qing empire, a move which became explicit in 1934 when Puyi was declared Emperor of Manchuko. Yoshiko was an active public figure in the new state. She organised a local militia of several thousand men, and led them in several actions to put down anti-Japanese guerrilla bands. She generally wore male military uniform when leading her men, an action some historians regard as trying to put herself on their level, while others point to her acknowledged bisexuality. Most seem to miss the fact that there was no alternative “feminine” military uniform available. Yoshiko was hailed by the Japanese press as the “Joan of Arc of Manchuko”, and she became a major celebrity – even releasing a record and starring as the heroine in several pulp novels.

It was this public role that proved Yoshiko’s undoing, however – in more ways than one. She had a close relationship with the Japanese military that truly ran Manchuko. Very close, in some cases, as she was briefly the mistress of General Hayao Tada, the “chief military advisor”. But her new role as the People’s Princess seems to have reawakened a loyalty to her Qing heritage. She began protesting against the Japanese control, and the brutal tactics they used to suppress any dissension. But Manchuko was a vital staging ground for the war between China and Japan, and so Yoshiko was sidelined. For the duration of World War 2 she effectively lived in obscurity – too well-known for intelligence work, too unreliable to be used for propaganda.

The end of World War 2 was the end of Manchuko – the state was dissolved and returned to the Chinese. They had problems of their own however. The People’s Liberation Army, which like a lot of post-war Communist revolutionary forces descended directly from wartime communist guerrilla groups, took control of Manchuria. In fact, it became their main base during the two years they spent fighting against the Republic of China for control of China. These were the direct inheritors of the same groups that Yoshiko had led an army against, and so they were swift to place her under arrest. She managed to evade them for two months, and probably hoped to escape to Japan where she might find sanctuary, but in November of 1945 she was arrested in Beijing. She was held in prison for two and a half years, and was the subject of a lengthy trial. One defence was to plead that as a naturalised Japanese citizen she was not a traitor but rather a prisoner of war, who had to be tried in an international court. This was not recognised, however, and she was sentenced to death as a traitor, a sentence carried out on March 25, 1948. Her last request, for a private execution, was not granted. Instead she was publicly executed by a gunshot to the back of the head, and her body was then placed on public display to demonstrate the fate of those who held loyalty to the old regime.

Yoshiko remained a powerful symbol, however, even in death. Rumours persisted for decades that she was still alive, and that the woman executed was a fake. In the late 1950s her sister (who had not seen her since they were infants) was arrested, simply for being her sister, and held prisoner for 15 years. The image of the androgynous Japanese spy also became a regular feature in Hong Kong movies, though her Qing heritage was a touchier subject. People preferred their villains less ambiguous. Perhaps she was loyal to the China she never knew, the China that ended just after she was born. Or perhaps she was loyal to the man that raised her, and to the country that took her in after he abused her trust. Or perhaps she was only ever loyal to herself. Whatever the truth was, it died with her.

[1] Tanaka went on to become a general in World War 2, most notable for initiating the “kill all, burn all, loot all” policy of scorched earth retaliation against the Chinese. Despite that he managed to avoid being tried for war crimes, mostly by acting as an intermediary between the authorities and the generals on trial in order to ensure their testimonies were arranged in advance of their appearance in court.

Cash and Cowardice: Misrepresentations of the Transgender Community