‘Tremble, tremble the witches have returned!’

After its much praised run representing Ireland at the Venice Biennale in 2017 (and subsequently being shown in Singapore), ‘Tremble Tremble’ has returned to Ireland and is on display in the Project Arts Centre until 18th July. More travel is in store for the installation – with showings in Edinburgh and Bilbau in the future. The installation has evolved with its various iterations, taking in some of the traditions associated with each location. In Singapore it featured a burning table, in Ireland it features waters from the sacred source of holy wells as well as symbols scratched and carved into the walls of the performance space. 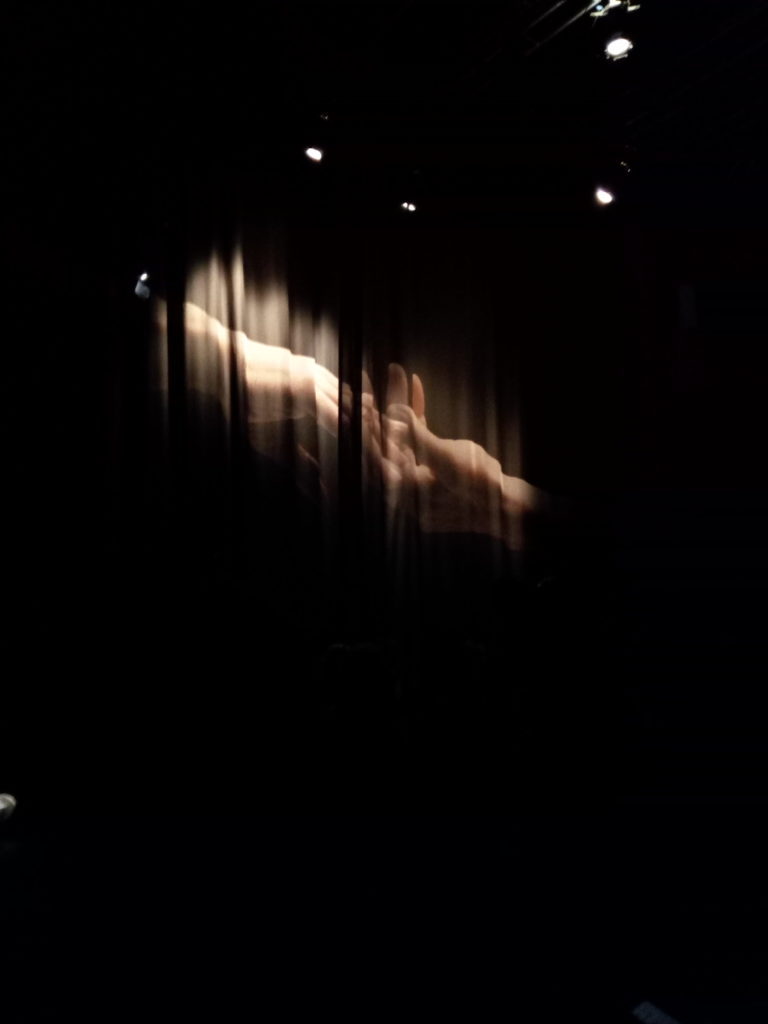 The artwork is particularly charged in post-referendum Ireland, and in the context of recent cervical cancer and adoption scandals, and the honouring of the women of the Magdalene Laundries this week.  Ailbhe Smyth (described by artist Jesse Jones as a ‘giant of Irish feminism’) gave a powerful speech at the launch about damage and embracing chaos, her closing remark ‘let’s have the noisy revolution’ was greeted with cheering and applause. She described the piece as ‘an excavation of what it means to be a woman.’ Artist Jesse Jones gave an emotional speech about the work’s reception thus far and how it connects to her own heritage, as well as to the experiences of women over the centuries ‘I’m proud to stand here today as the great-great-great granddaughter of the witches they tried to burn, because we’re here and we’re not going anywhere.’

‘Tremble Tremble’ is a thirty minute installation comprising video, text, soundscape, sculptures and theatre.  At first the darkened room is disorientating, but the experience soon becomes utterly immersive. Olwen Fouéré (in the role of Temperance Lloyd, believed to be the last woman hanged for witchcraft in England) is spellbinding, from the moment her towering image leans down asking, ‘Did I disturb ye good people?’ The video recordings feature incantation-like chanting, dance and movement, and scenes in a courtroom reflecting how the piece interrogates and questions the judicial system. Jones places her feminist witch at the centre, as a figure with the power to disrupt and cause chaos. With smoke, light, and gauzy curtains (decorated with hands evocative in some ways of the Creation of Adam, and also recalling the dance-like elements of the video), the space is used to great effect and Susan Stenger’s sound work is both atmospheric and unsettling. I am looking forward to returning to the exhibition, to immersing myself more fully in the experience without the noise of people at the launch in the background. Even so, being in ‘Tremble Tremble’ felt like wandering into a supernatural place outside of time and had a very profound effect on me.  Jones’ work gets right to the core of womanhood, linking a lineage of female pain, power and bodily experience through the centuries in a work that feels as monumental as the witch at its heart.

‘Tremble Tremble’ is a feminist political artwork with great relevance to contemporary Irish life but, as its international reception has shown, a piece that connects with people around the world in the current time of ‘noisy revolution’ we occupy. As the witch of the piece says, ‘You won’t forget us, even if you try and sweeps us away.’

Jenny Duffy is a tour guide, reviewer and writer based in Dublin. She can often be found dancing, crafting or wandering around art galleries. She tweets at @Jenny_books_art and her blog is https://thebookstheartandme.wordpress.com