Film Review: Mr. Holmes – OAP Sherlock and the Tale of a Once Great Mind 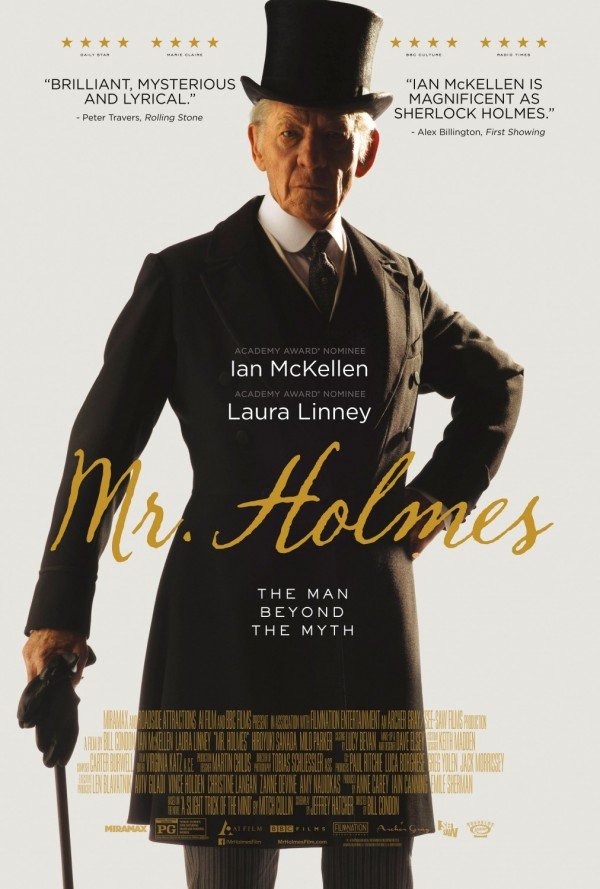 In a derelict library, books lie in disarray upon its floors. The dust of months and years has collected on them, obscuring their titles, and floats languidly above them in the shafts of light that sometimes break through cracks in the boarded up windows. The pages of the books are fading too. We can make out parts of the print but the details are disappearing and a sense of the intricacies of what was once whole now has become sadly incomplete.

The mind of Sherlock Holmes, the genius fictional detective has often been depicted as an immense store of knowledge, a ‘mind palace’ .This mnemonic device which Holmes makes use of requires the internal construction of a metaphorical, physical space in his mind in which knowledge may be ordered, represented and then accessed through the power of his intellect in order to find the piece of information he needs to solve his cases.

The concept of the mind palace derives from Greek Mythology. The story goes that the poet Simonides of Ceos was attending a banquet. He had been called out of the banquet hall to meet with two men and whilst there the hall collapsed behind him, killing all inside. The bodies of the dead had been crushed beyond recognition but Simonides was able to identify them all based upon where they had been seated.

In Mr Holmes Sir.Ian Mackellen plays the titular former detective who is now 93 years old and is living in a cottage in the Kentish countryside. He is struggling to come to terms with his failing memory while he attempts to recount the events of his final case, one which prompted his departure from London, and his life as the great detective.

Holmes spends much of his time pottering around the house, bickering with his housekeeper, played by Laura Linney, as well as caring for the bees he keeps on the grounds of his cottage. It is a far cry from the witty, high functioning sociopathic version of the character played by Benedict Cumberbatch in the silly but entertaining BBC television series SHERLOCK  or indeed from the witty, hyper-masculine high functioning sociopath rendered on screen by Robert Downey Jr. in the 2009 film Sherlock Holmes and its 2011 sequel Sherlock Holmes: A Game Of Shadows.

The story flits between Kent in 1947 and 30 years previously when Sherlock was still a detective. Holmes is attempting to write the true account of his final case, partly as an act of tribute to his departed friend and colleague Dr. John Watson and partly as a means of confronting the degradation of his memory, which he gradually accepts throughout the course of the narrative.

Every film is a result of decisions, both major and minor by the director and their collaborators. The film struggles at times under the weight of these decisions. Certain strands are given too much attention and serve to detract from the strength of the core idea, that of a man whose entire identity is founded on the power of his intellect and ability for recall, now coming to terms with the onset of dementia.

When the film does focus in on these strengths it allows for the actors to do their work and the performances are uniformly excellent throughout, though Laura Linney, one of the best actors in film, is painfully underused. The film is pleasant, and well made but an unremarkable experience that is raised higher by the strength of its performances.

Mr. Holmes is in cinemas Friday 19th June. Check out the trailer below.

Jonathan Sammon is a visual artist and film-maker. He tweets @SCANALYSER