It’s pretty reliable to assume that those calling themselves ‘mad’ are generally some of the most tedious people out there. We’ve all been cornered by some self styled ‘mad bastard’ at some stage or other and ended up bored to tears. This isn’t something you could say about this film. 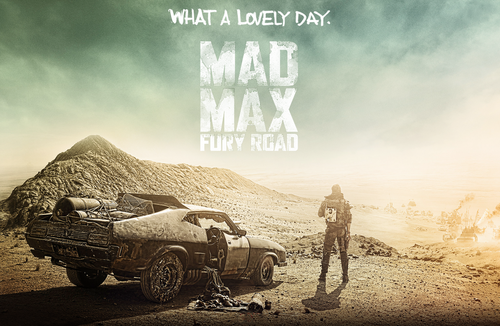 While Tom Hardy’s Max is surprisingly reserved (PTSD Max?) the film is certainly mental. Set years after a vague apocalypse, society has been reordered along the lines of 80’s metal album art. Max, captured by a gang of hooting skinheads in factor 200, gets caught up in a plot by Furiosa (Charlize Theron) to ‘steal’ something very valuable from head baddie Immortan Joe; a half Viking, half end level boss who is ruling as a tyrant over a desert stronghold.

The film then turns into what is, for all intents and purposes, an extended car chase. During the film’s opening every scene brings some new bit of cheerfully unhinged imagery. Once we settle in to the main plot and we’ve had everything introduced to us this effect gets lessened. At certain points it skirts close to boring but it’s always saved by joyous grotesquerie. Wait a few moments and someone will start drinking breastmilk or an assortment of wacky races style death machines will appear on the horizon like a mirage.

The action scenes are handled with infectious relish, being a good mix of brutality, style and tension. The stakes are mostly clear, bar one point where bad guys team up for little apparent reason. There is also one scene that suffers from coy censorship that lessens its impact.

The sense of novelty and fun is what elevates this above average action fare. The production design Colin Gibson deserves special praise. The costumes and machinery all have a great sense of the monstrous as something fun. It’s part Guillermo Del Toro and part Fast and Furious. This visual strangeness is complemented by a plot that teeters between a daft, regressive male fantasy and daft, pop-feminist empowerment fantasy.

One of the most surprising things here isn’t something as loud or showy as the films sensibility. It is how good the supporting cast are. Charlize Theron takes the ‘strong female warrior’ achetype and is interesting enough with it that she often eclipses Tom Hardy. Nicolas Hoult is also unexpectedly affecting as a wide eyed young fighter.

One image serves as a microcosm of this whole thing. That is, in a world where petrol is more valuable than human life, a man playing a guitar that shoots flames from the back of a custom vehicle full of drummers. Like everything else here, it’s nonsensical, garish and totally fucking rad.