Heartbreak, House-Hunting and Sleeping your Way to the Top 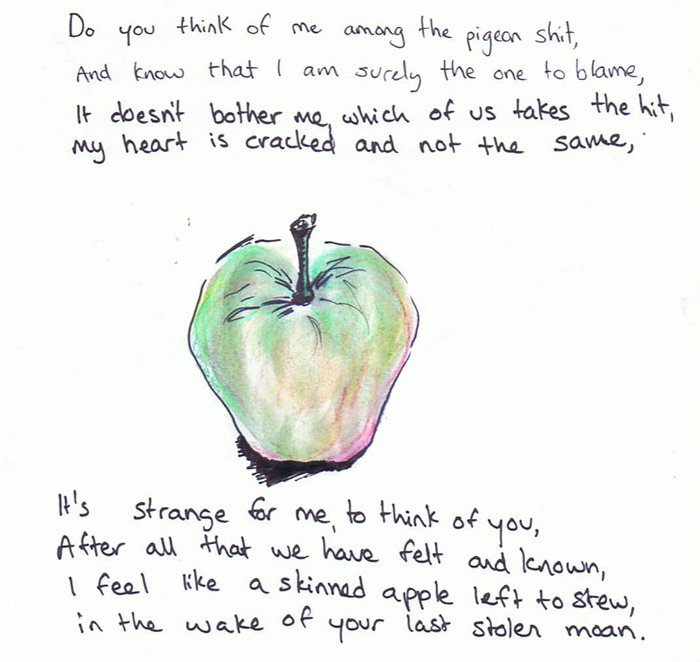 Banker boy has not accepted my friend request on Facebook.There is a poem surfacing about him, but as of yet, the pain is too fresh. It is a single thump to my face, that blossoms out in a bruise of despair.Actually that description’s quite brilliant, I might use it in a poem.

I watched all the DVD’s my brother left behind. Which was only BBC productions of Jane Austen Books. Mother came home to find me weeping on the couch with the cat and finding myself in a tub of ice cream. I’ll never know who I truly am, because she confiscated it before I got to the bottom of it.She claims you can’t be heartbroken over a one night stand.

I don’t expect Mother to understand that banker Boy and I existed in another dimension that night. Such things are hard to let go. And even harder to wrap your silly little mind around if you’re the kind of person that has settled for suburban mediocrity.

Mother found a copy of my cv. I had to listen to her screeching and tearing it to shreds. I think she believes she’s destroyed the only copy. The poor dear is still stuck in the stone age.

Anyway my cv stands out from the masses.

I researched a lot about CVs and it seems honesty is the best policy. The right pub will hire me and I will fulfil all their expectations. Both sexually and professionally. Sometimes it’s hard to bring this much to the table. 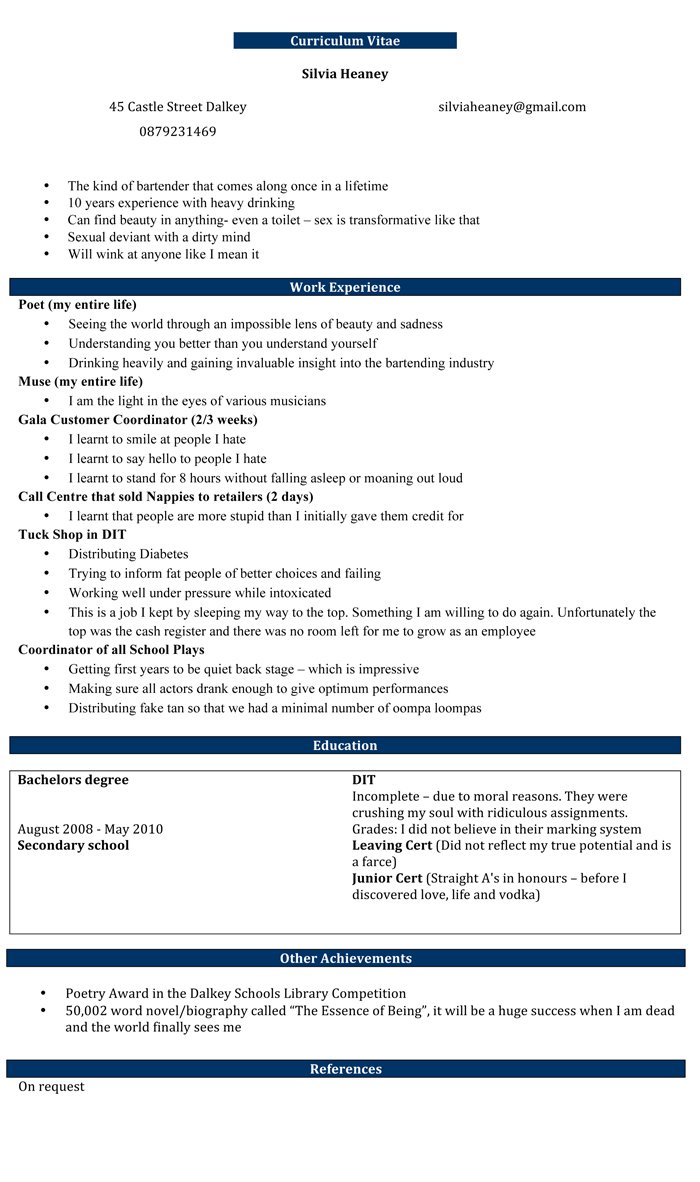 Laura had arranged a few viewings in town for us.The first was incredibly disturbing. It smelt of piss and we could just hear the people next door arguing over who was the best contestant in x-factor. I refuse to live beside people concerned with anything Simon Cowell has done to the world.The second was a shared bedroom in a house of “artists”. They were all ridiculous and had overly dramatic hair. I heard one girl saying she felt her piece didn’t really reflect what she wanted. I made sure to glance at the “piece”, before I left. It was a bunch of shoes stuck to the outside of a shoe box. I wanted to tell her it didn’t reflect anything. I told Laura we would not be living with them. Laura agreed, but on the basis that if we are both going to live promiscuous town lives…we need our own rooms. Laura probably thought the shoe box thing was art. She’s a bit dense when it comes to artistic appreciation.The third was a mouldy box apartment. It was immediately a no. Given the state of my liver – I cannot also sacrifice my lungs.The final apartment is the one. It had a teeny tiny little kitchen. You have to rotate in the kitchen to cook things and it’s actually relatively handy – saves a lot of time pacing back and forth between the fridge and the oven. One must always find ways to conserve their poetic energy, in this trying life full of menial tasks. The settee is all bent out of shape and buckled – obviously it has seen some good times. The spirit of the couch alone spoke to me. Then if all this wasn’t ideal enough there was a tattered copy of Silvia Plath under one of the beds. I knew then.

The bathroom has a hole in the wall where the shower was – but the landlady said she’d fix that, so it’s cosy really.

While we were waiting to sign the lease, I showed Laura pictures of banker boy. She said he’s out of my league. Some friend she is.

I realised I have not written in two weeks. I woke with a pain in my chest and knew the words were clawing to get out.

Sadly, mother insisted we visit my brother instead. That was the most draining 45 minutes of my life. I had to go back to bed afterwards and try to imagine a life in which everything was as simple as it is for Xbox girl. She literally giggles when you say hello. Surely life must be so much simpler that way.

I spent an hour writing poems in St Stephen’s Green with a bottle of wine, it was raining and the pigeons were being little shits.

I have been asked to read poems at an event next week. It was a friend of Laura. It is someone she tried to impress into sleeping with her by telling them she knew a poet. Now they are trying to impress her back by inviting me to read at their gig in town.

I must consider how to begin their introduction to my poetic voice. I feel sorry for Laura. Every man in that room will be held by my words, they will want to undress me as my words undress them.