Online Dating and the Death of Romance

This morning I remained bundled under my covers and cursed Gala for the ache in my lower back – buttering rolls has twinged something. I am too delicate for such labour. I spent the rest of the day redrafting my online dating persona.

I showed Laura and she said I was a dingbat. I told her nobody uses that word, but took note to incorporate it into my interactions. It’s quirky enough for me, but I don’t think it fits Laura’s persona. I’m surprised it’s in her repertoire at all. 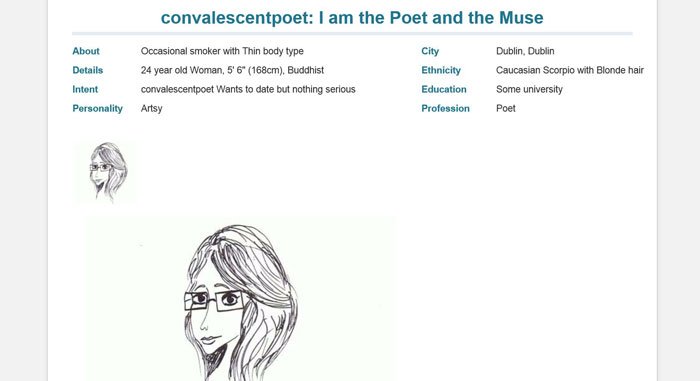 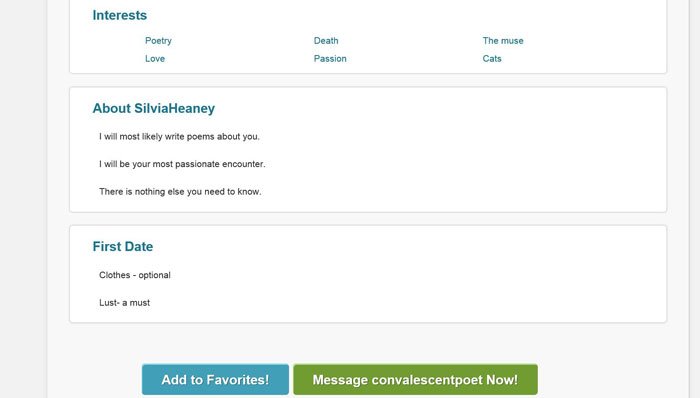 Some man has emailed me about wanting to eat duck and read Sylvia Plath together. Which would be great, if he wasn’t a hundred years old.

This was made all the more depressing by the fact that my brother was going out to meet some girl. I asked where he met her, because he never leaves the house. He met her on the Xbox. I’m not sure how that is possible, but it devastates me.

We ran out of butter today at Gala. I was supposed to alert someone and not just use mayonnaise instead. There was an emergency meeting in the cupboard, where we discussed the merits of using your initiative. We all had to say it was our fault. Lorna made us high-five and we are now striving to be a better team. It would be easier to function as a team if she would grow her eyebrows back, they are horribly distracting.

I spent the meeting trying to think of a vegetable to pen a verse about – I was blank. Butter was on the brain. See what this job does to me? It leaches the ideas from my soul.

On further consideration of my leached soul, I realised I am like a parsnip i.e. a soulless carrot.  I have found stirring content for my next poem. If only it were not so brutally honest and raw. It is hard to give so much of myself.

The cat escaped. Mother was crying even though she spends relatively little time with the thing. Then she cried because after we questioned my brother on the reason the window was left open it turned out he’s taken up smoking. I’m not sure mother will recover from this. Her son. The disappointment. The Xbox wielding, chain smoking weight in her life.

56 unread messages on Plenty of Fish. Quickly scanned the profiles. Can nobody in Dublin spell? Also how do you reply to: “SEX?” I can’t blame them really, they are powerless to the sexual tension my profile creates.

The cat returned. It looked apologetic and then proceeded to growl at the chair. Something hideous must have happened in its absence.

Word count: 5 – these may be my best yet

I wrote THE SENTENCE today. There is no more in me.