Hello hello. Hope you had a satisfactory weekend. If not, at least it’s over now. It’s Monday, it’s whatever time it is you’re reading this at, it’s time for another Tittererer’s Digest. I’m your Headstuff Humour Editor (and don’t forget it). Let’s go…

Clip of the week this week comes from the warped mind of Eric Wareheim (of Tim & Eric). HAM is a nightmarishly funny short film featuring music from Mr. Ozio and starring John C. Reilly. It’s all part of Jash presents Rubberhead – a variety comedy show hosted by Sarah Silverman, currently available to stream on Vimeo for five of your American dollars. Read more about Rubberhead here.

No especially amazing new sit-coms or the like beginning this week unfortunately so I was nearly going to give this section a miss this time around. That was until I noticed that A Film With Me In It, Mark Doherty’s heroically brilliant 2008 feature film, is on Saturday night on RTE Two. This is a very dark and funny film starring Mark Doherty himself, his brother David O’, Amy Huberman and the excellent Dylan Moran. Well worth a watch. Saturday December 6th on RTE Two at 9.30pm

I’m new to the comedy filmmaking creative collective that is Dreamgun, but I like what I’ve seen so far. They’re doing a fantastic sounding show this week in the Boy’s School space at Smock Alley. Here’s the pitch: “Chaos Theory is a long abandoned science experiment in which three test subjects attempt to perform twenty five short plays in every random order possible. Each performance explores the chaotic nature of probability and unpredictability by utilising the assistance of milk, ghosts, high tension hacking sequences, time machines, casual violence, robots, an invisible man, special guests and at least one more thing. No two shows can ever be the same. Or can they? No… They cannot.” Chaos Theory runs at Smock Alley on the 1st to the 6th of December at 8pm (12.30pm matinee on the 6th) in Smock Alley. Tickets available here.

In Cinemas This Week 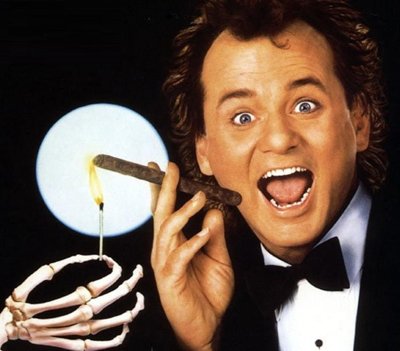 Nothing particularly funny and new coming to cinemas this week. I mean, I presume you don’t read this blog for me to tell you that Horrible Bosses 2 has been released. You won’t be getting that here. However, the Lighthouse Cinema have ridden to the rescue by screening the classic Bill Murray classic (I know) Scrooged twice this week. We’ve all seen Scrooged, right? Yes, it’s wonderful. So here’s your chance to see in on the big screen with lots of other people. Seize this opportunity!

Lighthouse Cinema on Thursday December 4th at 9pm and on Saturday December 6th at 10.30pm. Tickets available from here.

Tina Fey fans could do a lot worse than click here. The excellent Sidesplitter have been running a bi-weekly column about great Saturday Night Live alumni. They’ve done 120 profiles so far and, this week, they’re wrapping it all up with a fascinating feature on the brilliant Tina Fey. Set some time aside for yourself and enjoy!

That’s all there is this week. Chat to you next Monday.
@Shaneinho