A Successful Woman is Nothing Without Her Wedding Ring

Whether it be her iconic role as Rachel Green in Friends, or her numerous rom-com appearances, Jennifer Aniston has become a global household name. She is one of Hollywood’s highest paid actors. Her fortune is something akin to $110 million, and her movies alone have made over $1.7 billion worldwide. But amidst all her success, over the last decade Jennifer Aniston has been consistently hounded about her single status. So, why is it that success for women is so bittersweet without a wedding ring? 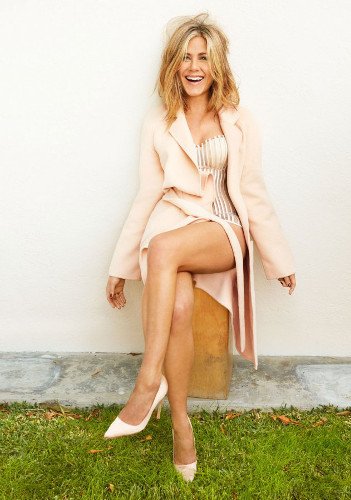 A public divorce is never pretty – especially when dogged with rumours of an affair. In 2005, Aniston’s split from Brad Pitt provoked an outpour of sympathy for the actor; and understandably so, given the allegations of a fling with Angelina Jolie. Pitt swiftly moved on to have a large brood with Jolie, and the two subsequently married. Although Pitt’s transition from first marriage to second was so seamless, the same cannot be said for Aniston. Despite other public relationships, she was always typecast as ‘Sad Jen.’ Any time she hit the headlines, there would be a sympathetic and plain old pitiful tone, simply because she was not married and didn’t have any children. It almost seems normal for there to be a degree of sympathy towards women who are single and childless. The mere idea that this may have been Aniston’s choice, and that she is, dare I say it, actually happy, seems apparently ludicrous and simply not possible. She is a woman, after all. And women need men and babies to be truly satisfied.

The 46-year-old is more than aware of her tabloid-narrative, and spoke of her frustrations last year to Harper’s Bazaar.

Seriously. How many times can I be out there in the world, enjoying my life, and yet the narrative is ‘Poor, Sorry, Sad in Love Jen’… whatever the stupid headline is.

Also speaking to Vogue, she said:

…there is more to me than just a tabloid girl. This whole ‘Poor lonely Jen’ thing, this idea that I’m so unlucky in love? I actually feel I’ve been unbelievably lucky in love.

However, despite these comments, the actress has held relatively silent on her divorce and other relationships. The media speculation and attention to her personal life certainly does not stem from slating her own exes.

Since announcing her engagement to Justin Theroux in August 2012, Aniston has remained at the centre of the media’s spotlight. A few weeks ago, when it was revealed that the couple had tied the knot at their Bel Air home, the reaction was one of exacerbated relief, that was also highly patronising. Not only have a myriad of tabloids, entertainment blogs, and ‘news’ sites been gushing over ‘Mr and Mrs Theroux,‘ but some have actually suggested that Aniston’s poor, broken heart has finally been mended. The Mirror decided to publish a particularly ludicrous article that revealed just how worried fans had been until Jen “hooked up” with Justin. Apparently, it was up to Theroux to save the day, by swooping into Jen’s life, and heroically rescuing her from tragic singledom, in what the tabloid called “A Second Chance.” How lovely. It does seem that until Jen found ‘the one,’ and was happily married, her career achievements couldn’t be validated, and neither could she.

A lot of other women face similar prejudices when it comes to their marital status. Assumptions of unhappiness, too many cats to count, and chocolate ice cream have plagued single women for years… And continue to do so. Yet, the same cannot be said for men. Long-term single men in the public eye are deemed ‘eternal bachelors’ with enviable lifestyles. George Clooney is a perfect example of this. The response to his marriage to Amal Ramzi Alamuddin consisted purely of best wishes, and featured no patronising commentary about how ‘Sad George’ could finally be happy now that he’d finally found ‘the one’.

Marriage is a wonderful, exciting, and generally nice thing. And even though it’s great to find someone you want to spend the rest of your days with, that someone shouldn’t define you – and neither should marriage.

It’s no secret that now people tie the knot much later in life. Last year, it was recorded that the average age of brides and grooms were the highest to date; with most grooms being about 35 years old, and the brides averaging out at 33. It’s also no secret that the world is progressing, times are changing, and social attitudes are shifting. Shouldn’t these changes be extended to the way we view women? Aren’t we passed ridiculing those who choose to sidestep tradition?

Marriage is a good thing. It can provide legal clarity and recognition, stability, and in essence, it declares one’s love for another person. But if someone – particularly a woman – chooses to wait, or never get married, then that should be respected too. How marriage is viewed and valued has certainly changed over time, and social prejudices should change with them.

Let’s leave the idea of the ‘spinster’ behind.

Amy McShane is a writer who recently completed her degree in journalism. She has a particular love of politics, and all things news.