This isn’t Equality, This is Control: Clare Daly TD on Repealing the 8th Amendment

For a number of years now, polls on Irish attitudes to abortion have shown a considerable shift away from a previous hard line stance towards a more tolerant and practical approach. A recent poll reflected that 64% of farmers – a traditionally conservative group – support the repeal of the 8th Amendment. This is indicative of the fact that over 4,000 women travel abroad from Ireland every year to access abortion services in other countries. Everyone knows that.

A few months ago, Amnesty International commissioned a Red C poll, which revealed that 90% of Irish people agree with abortion in certain circumstances, with 81% of those believing that abortion should be available in circumstances beyond the current right to abortion when a woman’s life is in danger. 68% of people recognise that the constitutional barrier of the 8th Amendment – which equates the life of a woman with that of a foetus – has not stopped Irish abortion. It just means that instead, it takes place in England, or Holland, or with a packet of pills bought over the internet. People acknowledge this and they want the hypocrisy to end.

In recent weeks, a momentum has been growing to push politicians to make abortion legislation a red line issue for any new government. The fourth annual March for Choice last month saw over 10,000 women and men take to the streets of Dublin and express their determination to fight for abortion access in this country.[pullquote]Large meetings have taken place in both UCD and Trinity College, as students are demanding their right to have a say on an issue which affects them, and which they never had an option to vote on.[/pullquote]

This September’s conference organised by the Coalition to Repeal the 8th saw a large attendance from a wide number of affiliated groups and individuals. Organisations across civil society, politics, trade unions and student unions have taken up this issue with a renewed sense of urgency; particularly after the success of the marriage equality referendum this summer. Large meetings have taken place in both UCD and Trinity College, as students are demanding their right to have a say on an issue which affects them, and which they never had an option to vote on. 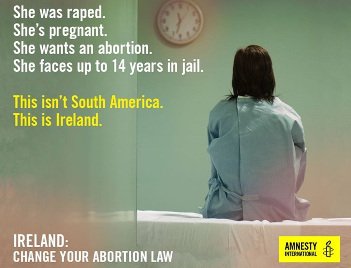 Every day, between 10 and 12 Irish women and girls travel to the UK to access abortion services. The majority are aged between 20 and 34. The women who have abortions are the women who have children – they are mothers, sisters, friends, daughters, and partners. Their reasons for terminating their pregnancies are all different, and all valid, but their reasons for travelling are the same. They cannot access safe and legal abortions in Ireland.

In the past, women with crisis pregnancies could be sent to the Magdalene Laundries. Now they are sent to other countries in order to exercise their right to health and bodily integrity. The 8th Amendment does not stop abortion, but it does mean that those women who are too poor, or too sick, or of precarious immigration status and therefore can’t travel, can be forced to carry a pregnancy to full term against their will; sometimes endangering their lives.

In his previous role as Minister for Equality, Alan Shatter said

The reality is that there is no impediment to men seeking and obtaining any required medical intervention to protect not only their life but also their health and quality of life… It can truly be said that the right of pregnant women to have their health protected is, under our constitutional framework, a qualified right – as is their right to bodily integrity.

But no proposal to deal with this discrimination was put forward by the government parties. In fact, when I moved legislation to propose a referendum on the 8th Amendment, it was voted down by all political parties – showing how utterly out of touch they are with the real lives of citizens. 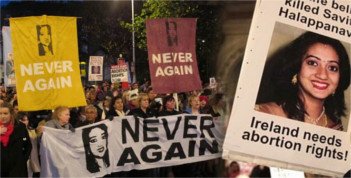 The 8th Amendment has negatively impacted on the quality of care that pregnant women receive in Ireland. This was evident not only in the tragic case of Savita Halappanavar, but also in the many cases of fatal foetal abnormality where women and couples are effectively deserted by our health services. Left with a choice of continuing a pregnancy when the foetus has no chance of survival, or travelling to the UK to avail of their health services, Ireland has failed these women and their families.

Amnesty International criticised this double standard in their report ‘She is Not a Criminal,’ which was published this summer and highlighted how Ireland’s abortion laws violate human rights.

These laws violate women’s and girls’ rights to life, health, privacy, non-discrimination and freedom from torture and other ill-treatment. 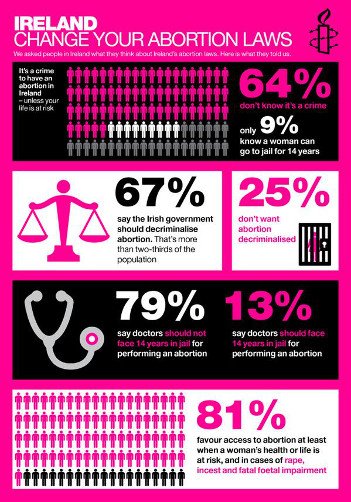 Within weeks of the Amnesty report, the United Nations Committee on Economic, Social and Cultural Rights called for Ireland to hold a referendum on abortion. The committee was concerned by Ireland’s “highly restrictive legislation on abortion,” and called for a referendum to repeal Article 40.3.3 of the Constitution. The UN Committee was also particularly concerned by Ireland’s criminalisation of abortion, which includes cases of rape and incest. The lack of legal clarity on what constitutes a real and substantive risk to the life – as opposed to the health – of the pregnant woman, and the discriminatory impact on women who cannot afford to get abortion abroad, was also cause for concern.

Not a single person of present reproductive age has had a say on this issue. Decisions for and about our health and our bodies have no place in the Constitution. We do not live in an equal society where women are trusted to have a choice regarding their own bodies. When the threat of prison hangs over a woman and her doctor if she has an abortion here, this is far from equality – it is control.

When women forcibly demand their right to choose, and it is recognised that women are the ones who should control their own bodies and destinies – not men in power – an important struggle for equality will be won. With an election on the horizon, let’s make repealing the 8th a reality, so that we can protect women’s lives, health, and choices.

Clare Daly is an Independent Socialist TD for North Dublin. She was the first parliamentarian to introduce legislation pro-actively calling for abortion legislation and tabled a motion to Repeal the 8th Amendment and legislation for permitting abortion in Ireland in cases of Fatal Foetal Abnormalities. Formerly a President of DCU Students Union. Clare's campaigning record on abortion dates back to the campaigns of the Union of Students and Ireland in providing abortion information and the Society for the Protection of the Unborn Child (SPUC)'s efforts to stop them.

Why selling your music to advertisers is no longer “Selling Out”

Great Scott! Back to the Future is Now!