Interview with Eoin Francis McCormack: The Artist as a Craftsperson

Eoin Francis McCormack received his BA (hons) from the Limerick School of Art and Design in 2010, and followed up with his MFA (hons) from Edinburgh College of Art in 2014.  Born in Co. Westmeath, he currently resides in Dublin, and works out of Steambox Studios. I had the chance to talk to him about art, craftmanship, and his upcoming exhibition ‘WORK’, which will be held at Steambox from December 10th to 23rd.

What’s the theme behind this exhibition?

I’m calling the show Work, because my practice is all about the idea of an artist as a crafts-person. Not just someone who has their head in the clouds, like artists are often depicted as. I really focus on having total control over the work and the physical aspects behind it, and I want to show that work in my practice. It’s kind of about… maybe, this Catholic guilt thing. I don’t want to see my parents and grandparents looking at me and going ‘well… what’s he doing?’ so I’ve built up this work ethic, to put all this time and effort into the process behind the painting. I stretch my own canvas and tools, and mix the paints, and that’s all part of the practice. Maybe I get too caught up on that idea, but I think with art you can really tell when the work’s been put in.

How do you make your own paints?

I use pigment powders… I guess just the traditional way of making paint, nothing really special to it. It’s just about having more control about the colour and the way it dries. I’ll get a powder and mix it with beeswax or different bases… then I’ll add extra dryers or pre-made paint into the mix, and they effect the paint it in a weird way where the outer layer dries really quick. It’s almost like it’s drying too fast for itself, where the outer layer will dry and start to wrinkle or crack, and the inside will still be wet for weeks, sometimes months. I’ll paint on the ground with the canvas laying flat, but when it dries to a degree, I’ll pick it up, put it on the wall, and the inner wet paint just… goes. It’ll drip and move on its own, while the outer layer stays in place – it’s really great to see.

So you’ve got control over the whole set up… but there’s also this free-flowing element as well, is that right?

This is a real important part of it… the aspects of having I suppose it would be called, controlled chance. You make all these decisions and lay it all out, and then you put it up on the wall and it starts to change – but even the action was very deliberate. I’m really interested by that process… in college I started looking at a guy called Roxy Paine, who was making machines, painting machines, that would essentially take the mark out of the painter’s hands. So he’s creating paintings that he’s never actually touched… but he still has complete control in the sense that he made the machine, and he might be able to control that better than he would if he were painting it with his own hands. I thought it was really interesting.

How large are your paintings?

I primarily do large triptychs. They’re 6 by 4 foot for each the three end up taking up about 15 feet across the wall. With the studio I’m at now, it’s a pretty small space and so it’s forced me to think about scale and work on smaller stuff, focus on the detail more. But I suppose the scale for me is just like another an ingredient in making the work. The large ones for example, because the pieces are around 6 feet tall, they’re like life-size – you can almost step into them. When they’re that size they’re almost like sculpture, they really come into the room, they hold a presence. They don’t demand attention in an aggressive sort of way… but you definitely can’t miss them.

Do you have a specific process for coming up with new work?

For the first one I’ll do all this messing, working with new ideas on the canvas. And once I finish it, the following two will almost be copies from the first. They’ll start as direct copies, but I paint them again and again and see what changes each time… and they end up being a series.

For some other works I’m using print-making methods. Basically I get carpet underlay, and it’s like a foam with all these risen dots on it, and so I put ink all over the surface and use it to print on the paper. It’s  kind of hard to imagine but essentially you get layers and layers, all these dots upon dots, and it’s creating this repetition and texture… just from using found materials.

Who or what are your artistic influences? 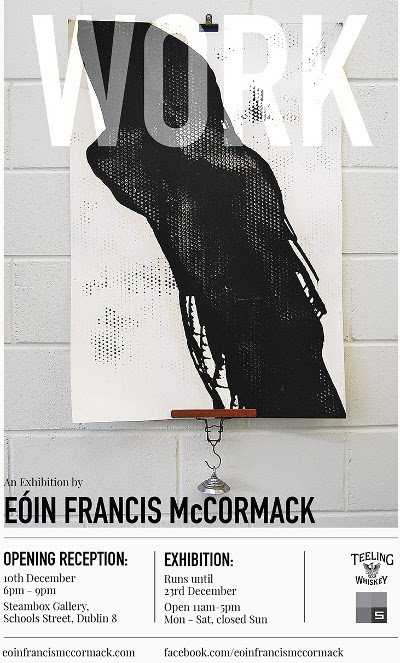 I’m really inspired by all sorts of things… actually, a lot of it’s music. I’m a massive Bob Dylan fan. I actually name a lot of paintings after Bob Dylan songs, which is probably something I really need to stop doing… *laughs*

But there are other things that influence the work, maybe not so directly. I’ve got this painting for example, called Modern Times, which comes from the old Charlie Chaplin movie about the industrial revolution. So these dots I mentioned earlier, layers and layers of dots which look like Braille… they  remind me of or the old ‘clock in clock out’ cards workers used to use, you know the with the holes punched into them. And it’s funny because you’re not going to think of the industrial revolution when you see these big, pink paintings, but it’s where my mind was when I was creating it.

Has your work changed a lot since you started?

I did all these series of line paintings for years, but I felt like I needed to get away from them because I could practically do them in my sleep. I’d fallen into this weird pattern… and when you get comfortable doing something, well it’s not really healthy for someone who’s trying to grow as an artist. So I had these new ideas in my mind of what I wanted to do; I knew there would be direct lines but also lots of colour and a border. Like how a page is laid out in a book, with lines going from left to right, and all contained within a border or margin…  I wanted to recreate that in the sense that you could ‘read’ the painting. That got me into working with the print-making methods as well, and it’s changing still. I’m always trying new materials and avenues.

The recurring theme though is definitely about the having total control of the process, along with the time spent with the painting. In college we went on a trip to the Tate in London. We went to see Mark Rothko in this big ‘Rothko room,’ and there’s just his big paintings up on the walls. And we were made to go sit down for a while and really look at them. I love that idea of almost being forced to just spend some time on the work and really take it in and appreciate it. Felt like being in a church almost. That’s really important to me, because usually the time spent by the viewer is so brief… they tend to just flow past stuff, while the artist has put so much time into it. I hope the time spent looking at the work would be worthwhile.

Eoin’s exhibition ‘WORK’ will be at Steambox Studios on School Street in Dublin 8
From December 10th – 23rd
Opening night is the 10th at 6pm
http://eoinfrancismccormack.com/

Exhibitions: ‘Diary,’ ‘Beyond the Beyonds,’ and ‘The…

The Art and Identities of Leigh Cooney