Here are my picks for the top 5 best, worst and just plain interesting things that happened in Visual Culture in 2014. 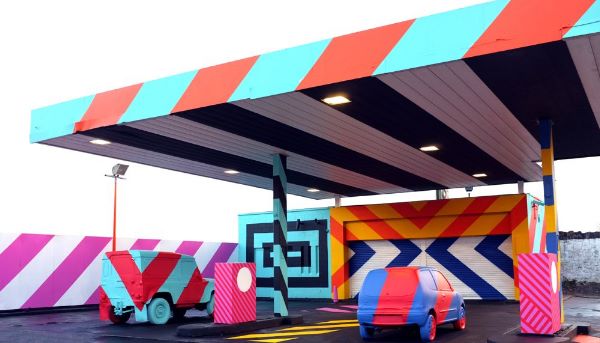 We kicked off 2014, Limerick’s year as City of Culture with a little controversy after the resignation of the artistic director. Luckily Mike Fitzpatrick, Head of Limerick School of Art and Design stepped in to oversee what has been a really exciting year of events in Limerick. Besides the huge variety of things happening in music, theatre, food, fashion, history and craft there were also some great art events. EVA International was the big art-world draw showing work from the world’s leading artists and curators. Draw Out was a large-scale urban art project that included artists like Maser regenerating derelict sites across the city and Royal de Luxe brought their giant Granny to walk the streets of Limerick. Offset even organized a special weekend of talks at the art college on design, advertising, illustration and animation. It’s not over yet either, you can still catch the Winter Carnival until the 27/12.

Sean Lynch for the Venice Biennale 2015

Sean Lynch will represent Ireland at the Venice Biennale next year. A native of North Kerry, a graduate and lecturer at Limerick School of Art and Design, he lives in Askeaton, Limerick and London. His work combines a narrative strength with an incisive ability to discover, research and translate complex cultural issues. Sean has already gained considerable international recognition and utilises his particular strength to forensically explore trails of forgotten stories and contextualise them within the contemporary context. He is currently showing work at VISUAL in Carlow if you want an idea if what his Venice work might be.

Irish Are Big Winners In The Art World

Speaking of the Venice Biennale Elaine Byrne won the coveted prize for sculpture at the 8th Arte Laguna International Art Prize held in the Arsenale, Venice in March this year. The winning work RAUM was first shown at the Kevin Kavanagh Gallery in Dublin in January 2013 and was recently shown in the Limerick City Gallery. Thirty finalists were shortlisted from over 1,000 entries in the sculpture category and Elaine is the first Irish artist to have won an Arte Laguna prize in any category. Also winning big this year with his work for Venice in 2013 was Richard Mosse. Mosse was awarded the £30.000 Deutsche Börse for his work The Enclave. The exhibition documents a haunting landscape touched by appalling human tragedy in eastern Democratic Republic of Congo, where 5.4 million people have died directly or in directly as a result of war since 1998. Shot on discontinued military surveillance film, the resulting imagery registers an invisible spectrum of infrared light, and renders the jungle war zone in disorienting psychedelic hues

This year the 30th Turner Prize was awarded to Irish-born, Glasgow-based artist Duncan Campbell. Five of the last 10 winners, including Campbell, are graduates of Glasgow’s School of Art and he was the favourite long before the winner was announced at Tate Britain by British actor Chiwetel Ejiofor. Responding to Chris Marker and Alan Resnais’ 1953 film Statues Also Die, which explored African art and colonialism, Campbell’s It for Others included new work by choreographer Michael Clark and the piece was his contribution to Scotland’s pavilion at the Venice Biennale. The 54-minute film also references the IRA and subtly critiques the British Museum. Campbell’s Turner Prize winning work as well as previous films are showing at IMMA in Dublin as part of a major show until the 29/03/15.

A worrying new trend has emerged this year – the celebrity as artist. James Franco is continuing to paint and take photographs, work which caused New York Times art critic Roberta Smith to plead “that someone or something would make him stop.” Miley Cyrus showcased her artwork back in September with an exhibition entitled “Dirty Hippie”, a collection of collaged sculptures crafted from such unconventional materials as a vibrator (a gift from a fan), a marijuana joint, party hats, and a pineapple. It looks rather a lot how you would imagine Cyrus’ artwork would look, a bit all over the place and painfully self-conscious. Cyrus was even invited to perform this week at one the world’s largest art fairs, Miami Basel, so perhaps it isn’t the last we’ll be seeing of her art. On a darker note Shia LaBoeuf’s mental unraveling this year and his series of artistic performances have ended in allegations of rape. In February LaBoeuf began a project called #IAMSORRY by way of apologising for his plagiarism of comic book writer Daniel Clowes. Hundreds of people queued outside an LA gallery for a one-to-one encounter with him, a stunt that borrowed heavily from the work of performance artist Marina Abramovic. LaBoeuf later appeared on the red carpet with a paper bag over his head that read I AM NOT FAMOUS ANYMORE and it has emerged in the last week that LaBeouf was raped during #IAMSORRY performance, which is a pretty sad and disturbing turn in this whole saga.

This year’s OFFSET had an amazing lineup of speakers but one speaker that definitely filled the auditorium was Jessica Walsh of Sagmeister & Walsh. Walsh is a bit of prodigy, having started to code when she was just eleven, she earned her BFA from the Rhode Island School of Design in 2008 and was made partner at Sagmeister Inc. aged just 25. She gave a great overview of some of the work the studio have done for clients like Levi’s, Aizone and Adobe and also talked about her 40 days of Dating project that she devised with her friend Timothy Goodman. The project was a social experiment where they decided to date for 40 days to see if they could overcome their relationship issues and fall in love and documented the whole experience on their blog. Even though the experiment ultimately didn’t succeed, the book has just come out and they have also sold the film rights to Hollywood.

Speaking of Hollywood, the film may be 15 years old but ‘Stuart Little’ has recently been the subject of a lot of interest due the fact that a lost masterpiece has been discovered hiding in plain sight. The painting in question, ‘Sleeping Lady with Black Vase’ by Hungarian painter Robert Bereny, appeared in scenes of the movie without anyone realizing its value. An assistant set designer had purchased the artwork for $500 as a prop for the film, and it was later sold to a private collector. Now the painting is up for auction, with a reported starting price of around $138,000.

The Exhibitionist | 6 | feat. Punch a Monet