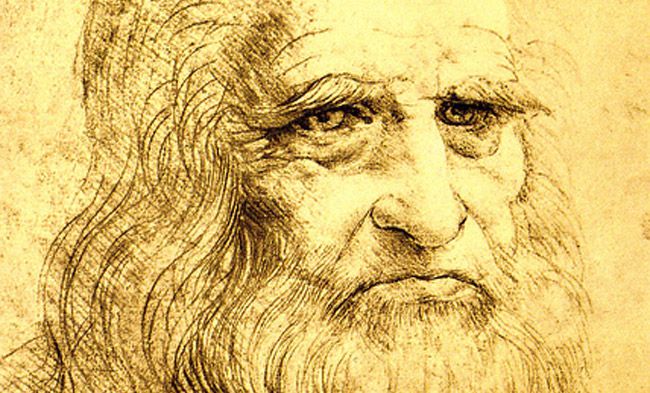 The article doesn’t end there. He was better than good. Leonardo da Vinci was probably the most genius genius to ever exist in our genus (or our species). In many ways, I don’t think it’s unfair to say the man was a freak.

He was Italian, born in Vinci (his surname just means ‘from Vinci’) on April 15th 1452. He was a polymath, which sounds negative, like a mass murderer that insists on using plastic cutlery. But no, a polymath is a person who can do too many things (‘too many’ is my addition). He could do pretty much everything better than you can do anything. He racked up so many achievements in his sixty–seven years of life that being a HeadStuff ‘Legend of the Month’ probably wouldn’t even be on his C.V.. Having said that, I have no doubt that he would have loved to have been here to see it. But he can’t, he’s been dead nearly five hundred years. Spoiler alert. Unless he invented the time machine, which, let’s be honest, if anyone was going to do it, it was our pal Leo.

He basically invented the helicopter three hundred years before anyone even came up with the bicycle. Obviously it wasn’t his mode of transport, it was never actually built, he designed the thing before any of the required stuff existed. He was just so far ahead of his time. It’s like if Charles Dickens had designed the iPhone before Alexander Graham Bell was awarded the patent for the first telephone device.

I assume we think of Leonardo da Vinci as a painter? Would I be wrong there? Despite the fact that his wrestler nickname is “The Father of Modern Science” (he’s one of many, modern science has loads of dads), and he invented ridiculous stuff for a man living before electricity or steam power, he’s still best-known for trivial things like ‘The Mona Lisa”.

He was obviously a dab hand at art, he engineered war machines for various kings etc. (as you do), he invented mad things like the ‘Double Hull’ which passenger ships are still required by SOLAS law to have, he cut open loads of human bodies and had a look around, he drew very accurate maps in a time when maps weren’t too common, and he basically came up with plate tectonics centuries before scientists agreed upon it, (he probably should have published some of this stuff).

Like myself, (trying my best to shoe-horn any vague comparisons whatsoever), Leonardo da Vinci had an “unquenchable curiosity”. But where I’ll read something and say, ‘hmm, that’s interesting, I might look at something else related to that later’. Leonardo would say, ‘Aha! I understand! I’ll be the most prominent man in this subject and then I’ll play cricket after lunch’. (He wouldn’t have played cricket) (He probably painted “The Last Supper” after lunch).

There’s actually way too much about this legend for me to talk about. Every time I read about him I lose hours. He’s far too fascinating for me; he blows my mind. I’m going to put a gallery below, just of a load of his cool stuff, and then I suggest you read up all about him yourself if you haven’t already. Trust me, he’s a good guy.

If this has all been a bit disheartening for you and now you think getting over 400 points in the Leaving Cert isn’t quite the achievement you’ve been making it out to be, then take solace from this; da Vinci was a bit of a procrastinator. You’ll see below in the gallery that he didn’t even finish most of his paintings. (The under workings and sketches alone are probably still masterpieces, but still, he didn’t finish a load of his own work.)

It was probably more that his brain was so insanely active and able that he continuously got excited about his next project (genius idea) before finishing what he was working on than he was sitting on his hole watching boxsets of ‘Dexter’, but still, he was a procrastinator. Put that in your pocket and pull it out anytime you feel bad that you didn’t put on that wash last night. Da Vinci probably wouldn’t have either.

Over the last month the clue for Leonardo da Vinci was the circle and square from his Vitruvian Man drawing. See if you can work out this month’s clue for the next Legend of the Month. Answer in comments below or on Facebook/Twitter.

When Will I Get My Nobel Prize?