Sidney Reilly, the Ace of Spies 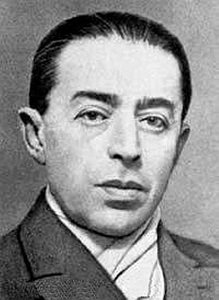 “The most famous secret agent in history” is somewhat of a contradiction in terms. If someone is famous, they’re hardly that secret. Sidney Reilly avoids this contradiction by being impossible to pin down. His real name, his place of birth – both unknown for sure. Exactly which of the exploits attached to his name he actually did is also unclear, as he was not above claiming credit for things he didn’t do while disclaiming those he did. So exactly how much of the following is actually true is hard to say.

Reilly was born somewhere in Imperial Russia around 1873 or 1874. His surname was Rosenblum, but his forename is given variously as Salomon (Shlomo for short), Sigmund, or Georgi. There are several possible explanations for this confusion. In some parts of Russia Jewish families such as his would give a child a Jewish name to use within the community and a non-Jewish name to use without, hence Salomon and Sigmund. Georgi may be a corruption of Grigorovitch, as his father was a Jewish doctor named Grigory Rosenblum. (Or rather, official father – some would claim that he was an illegitimate stepson who Grigory adopted. Reilly himself would claim to be the son of an Irish sailor, or an Irish priest, or an aristocrat, or the Tsar of Russia himself.) He was probably born in what is now Ukraine, either in Odessa itself or in one of the surrounding villages. He was definitely living in Ukraine in 1892 when the Tsarist secret police issued a warrant for his arrest, as he was acting as a messenger for one of many revolutionary groups in the Empire. He faked his own death (possibly adopting the Sigmund name at this point) and escaped.

Reilly stowed away on a ship to Brazil, where he took on the name of Pedro and learnt both English and Portuguese. There he worked at a series of odd jobs. While working as a cook on a British expedition through the jungle, he helped drive off an attack by natives and so impressed the leader of the expedition that he gave him a reward of £1500 and a British passport. Or so he claimed when he arrived in London in 1895. Other evidence points to him having stolen the money from two Italian anarchists he murdered in Paris, and that the passport was a forgery. However he got it, he used the money to establish the Ozone Preparations Company. Through this he sold all manner of fake miracle cures to the public. On the side, he also became a paid informant to Scotland Yard on the emigrant communities in London. One of the customers for his miracle cures was the elderly Reverend Hugh Thomas, who made the mistake of introducing Reilly to his wife, the far younger Margaret Callahan Thomas.

Margaret and Reilly soon began an affair, which only grew more heated over the next six months. Reverend Thomas was a wealthy man, and on the 4th March 1898 he altered his will to give Margaret his entire fortune, and appointed her as his executor. A week later, the elderly Thomas (who suffered from kidney inflammation) and his nurse (who Margaret had hired) checked into a hotel. The next day he was found dead. Exercising her authority as executor, Margaret had him buried within 36 hours (with the death certificate signed by a mysterious “Dr Andrew”, who bore a suspicious resemblance to Reilly. Six weeks later she inherited £800,000 – a considerable fortune for the time. Six months later she and Reilly were married, and it was at this point that he began using the name “Sidney Reilly”, finally putting Rosenblum behind him. Helping him do this was his former boss at Scotland Yard, William Melville. Melville was the head of Scotland Yard’s “Special Branch”, but resigned in 1903 to secretly found the Secret Service Bureau, the predecessor to MI5 and MI6. With his aid, Sidney Reilly soon became a totally separate person from Salomon Rosenblum – enough so that Reilly could, with his new wife, return to Russia.

In Russia Reilly’s main job was charting the extent of the Russian oil reserves in the Caucasus. Once this was complete the two moved on to the Far East. Here Reilly appears to have worked for the Japanese, who were allies of Britain at the time, in gathering intelligence in the run-up to the Russo-Japanese War. Reilly also turned the situation to his advantage by recruiting a man named Moses Ginsburg as a partner and buying up a lot of supplies, turning a hefty profit when war broke out and prices skyrocketed. It is also rumoured that he sold the plans for the minefield protecting Port Arthur (which was under Russian control) to the Japanese, leading to their surprise attack which started the war

Reilly’s exploits over the following few years become somewhat hazy, as he made a habit of introducing himself into most of the major espionage exploits of the early 20th century. He claimed personal responsibility for persuading William D’Arcy Knox, a speculator who held the rights to all the oil in Persia (modern-day Iran), to go into partnership with the British government. This deal would later lead to the founding of British Petroleum, and would help to secure a steady supply of fuel for the British navy during World War I. Reilly also claimed to have stolen secrets from the Germans. In 1909 he studied welding at a firm in Sheffield in order to infiltrate a German shipyard using the name “Karl Hahn”. In this guise he became a member of the shipyard’s fire brigade, which gave him access to the plans of the plant which showed fire exits and the location of firefighting equipment. This showed him where the plans for the ships and their weaponry were located, allowing him to steal them. While the details of this story can be argued, the records do show that a Karl Hahn did indeed briefly work at the shipyard in Essen in 1909 – and the shipyard did have a fire brigade. Following this he moved to Russia, where he gained access to the upper circles of society by sponsoring air races. Once there, he seduced the wife of a Russian minister’s assistant to gain access to her husband’s secrets, finding that a German firm had been contracted to refit the Russian fleet. Reilly set up a shell company and had it named as the local agents of the German firm, ensuring that British intelligence had access to all the designs that the Germans used. Meanwhile Reilly planted stories in the newspapers of Margaret’s death and took the assistant’s (now ex) wife to America with him. They were married in 1916, again lending some credence to the tale.

One might expect such a notable spy to have been active during World War I, and one would be correct. But Reilly’s main activity does not appear to have been on the Continent, despite the stories he dined out on afterwards of infiltrating German High Command dinners and hoovering up gossip. Instead, he spent most of the war in America – arranging arms sales to both Imperial Russia and, indeed, Germany. This profitable trade was cut off by Russia’s exit from the war (following the Bolshevik revolution) and America’s entry (making trade with Germany illegal). Deprived of income, Reilly approached the head of the British spies in New York, a man named Norman Thwaites, looking for work. Thwaites had no work for him in America but recognised Reilly’s value as an asset, despite being warned of his venal nature. He sent him north to Canada, to join the Canadian Royal Flying Corp as a lieutenant. By 1918 Reilly was in London where he and Robert Lockhart, the former British Consul in Moscow, hatched a scheme that could have changed history. They were going to overthrow the Bolsheviks.

The exit of Russia from the war had been a blow to the Allies, and so they were very open to the idea of overthrowing this new rogue government and putting a dependable ally in power. Reilly and Lockhart soon began organising the resistance against the Bolsheviks, with Lockhart openly present in Moscow as a “legal” at the diplomatic mission, while Reilly operated as an “illegal” in the city’s underground. Unfortunately for the men, before they could enact their plans the Allies invaded the city of Arkhangelsk in northern Russia, to support their allies in the Czechoslovak Legion and to secure their supplies in the area. In retaliation the Russians raided the British mission and stepped up surveillance, disrupting the timetable. Nonetheless the date was set for the coup to take place in early September, beginning with an attack on a gathering of Soviet leaders at the Bolshoi theatre. Unfortunately Fanya Kaplan, a Russian woman unaffiliated with their plot, made an attempt on Lenin’s life on the 30th August. The same day the head of the secret service in St Petersburg was murdered by a military cadet. These two incidents sparked a vicious crackdown on all subversives and perceived enemies of the Revolution, and soon enough details of the planned uprising emerged. The Cheka, the secret police of the Bolsheviks, rounded up and executed thousands of people, including both of Reilly’s mistresses. Lockhart was arrested, but his status as a “legal” meant that he could be traded for a Russian diplomat. Reilly escaped over the border to Finland, using German diplomatic papers. The “Lockhart Plot” was a failure.

Both Reilly and Lockhart were later declared enemies of Russia and sentenced to death in absentia, and Reilly in particular became an obsession of several Russian intelligence chiefs. The OGPU, the official organisation that replaced the Cheka, had set up a honeypot known as The Trust. The purpose of the Trust was to act as a front organisation, drawing in those who planned coups such as the Lockhart Plot and allowing them to be eliminated. The core was the White Russian sleeper cells in Russia, which they had left intact but suborned and thoroughly infiltrated. In 1925 they managed to lure Reilly to Russia to meet with people he thought he could trust, but as soon as he crossed the border he was arrested. Reilly was held prisoner for two months, during which he was thoroughly interrogated by the OGPU. Finally the order came down from Stalin himself that Reilly was to be liquidated. On November 5th 1925, while out for his daily exercise walk in the forest, Reilly was shot and killed by his guards. After his death they investigated his cell and discovered that he had been secretly documenting all the interrogation techniques they had used on him, written on cigarette papers. Doubtless even up to the last he was planning for an escape.

Sidney Reilly became a legend of the intelligence community, with his penchant for fine living making him an aspirational model for spies throughout history. Perhaps his most famous influence came through Lockhart’s friendship with a young British Intelligence officer named Ian Fleming. Lockhart’s stories of his personal acquaintance with the famous Reilly helped to shape the character of Fleming’s famous creation, James Bond, with his fondness for women, gambling, and high living. Reilly himself has appeared on screen in several incarnations, most notably portrayed by Sam Neill in the 1983 TV series “Reilly: Ace of Spies”. So the fiction and the tales told among the intelligence community serves to erode the truth around Reilly even more. It’s not surprising that stories were told of him outwitting the Russians – of him being kept on as an asset in Moscow after his apparent death. Despite the evidence, we all want to believe that the master of deception could have tricked us one last time.