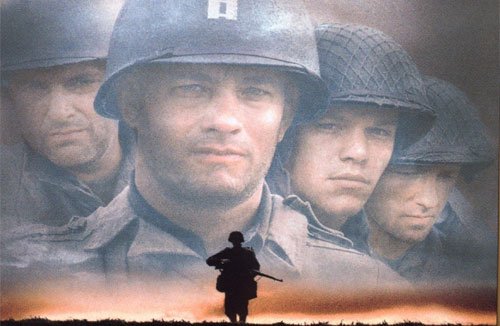 I have watched Saving Private Ryan more than any other film in history. I have seen it over 25 times. That’s 4225 minutes or nearly 71 hours of my life watching the same film.

This film is a master class in cinematography, and sound, and editing and all the technical aspects of filmmaking. Tom Hanks portrays the reserved and internally fragile Captain Miller with great care and sensibility. The cast is full of well-known actors and solid performances. The battle scenes are simply breath-taking with the D-Day landings and the Battle of Ramelle taking up nearly an hour of film, and Spielberg directs with perfect pacing and ultimate vision. Everything works just right from the brutal opening, through the soft sentimental bonding to the final heart wrenching climax. So why is it not in my Top 10 films of all time?

It’s hard to say…I think while Spielberg is without doubt one of the greatest movie directors of all time he does like to sugar coat the shit out of everything like an overzealous sales rep for Siúcra. Saving Private Ryan will not stick in your head like, say, The Thin Red Line or Das Boot will. It will not change your perspective on how and why wars are fought. It will not make you want to vote for the left or the right. It will not change your life and therein is my only issue with this film. It is too straight and narrow. A love letter to the heroes who fought the good war with no hint of subtext or disparagement. And that is what Spielberg does wonderfully. He shows you how to feel like the soldier shouting for his momma as he lies dying on the battlefield. You’ve seen it before but he just does it better. This is a fantastic film and can easily occupy 71 hours of your life if you want it to and it will be 71 hours of your life well spent. For what it is, it gets 8 hamsters. 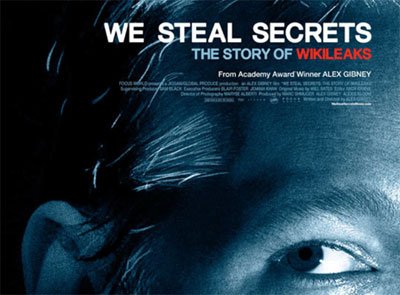 We Steal Secrets: The Story of Wikileaks (2013) Dir. Alex Gibney

Another important film from accomplished documentary film maker Alex Gibney (see my review of Enron here) which attempts to reveal the truth behind the establishment and momentous rise to the world’s attention of information freedom fighters Wikileaks, focusing on their enigmatic and controversial figurehead Julian Assange.

No matter how objective you feel you are, your views on Wikileaks and especially Assange are coloured by what version of the media you read and what stories you believe, as this organisation are as vehemently hated as they are championed across the globe. Therefore attempting to impartially tell the story of this ultimately important organisation is as difficult a job for any filmmaker out there. What Gibney attempts to maintain above all is his neutrality and thus paints the picture of Assange as both the flawed but brilliant idealist fighting the darker elements of the world’s most powerful countries. What the film doesn’t address is the more broad reaching social impacts of the world Assange wants to create but that could be a whole separate documentary on its own.

The film is engrossing from start to finish and whether or not you agree with the ideology of the protagonists is independent of the film’s merits. I re-watched We Steal Secrets this week to whet the appetite for the upcoming release of Citizenfour which, by all accounts, is a monumental piece of documentary filmmaking which follows NSA analyst and whistleblower Edward Snowden’s journey from obscurity to international notoriety and is due for limited release in the coming months. These are important times and these are important films about important people therefore I will give them hamsters as a measure of quality cause that’s just who I am. We Steal Secrets gets 9 hamsters out of 10 hamsters. 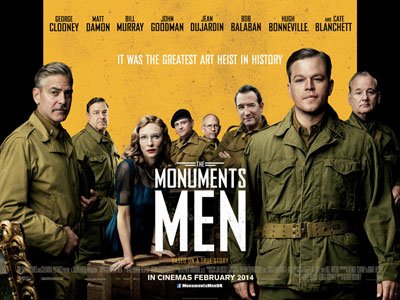 As the end credits began to role I immediately forgot everything about this film except one thing. That thing was the feeling I had when I first heard about The Monuments Men. I remember feeling excited.

I mean the film was fine but there was absolutely nothing memorable about it apart from how unmemorable it was… does that make it memorable? Maybe. Either way it had more going for it than probably any film could want with a super cast (George Clooney, Cate Blanchett, Matt Damon, Bill Murray, John Goodman), poignant and thoughtful source material (based on the true story of a platoon of art aficionados sent into occupied France to save precious art from the Nazis… I mean COME ON!), the creative team which brought you Good Night and Good Luck (in my opinion one of the best films of the last decade) and about as much hype as a film could want to be a stellar blockbuster. Also, did I mention Bill Murray?

But something happened and it all went very flat. From the jokes to the set pieces… flat. The suspense and the pulling of the heart strings… meh. The acting was passable and it felt like the cast were never asked to move a muscle from the silk lined couches of their comfort zones, hoping their charm was enough to facilitate engaging an audience in the story. The script was as blunt as a Nazi’s helmet and the film seemed to lurch from one place to the next with no rhythm or reason. It’s hard to say where exactly it went wrong because everything is passable. If this film was a result on an exam it would be a C. Could do better. It’s 5 hamsters from me!