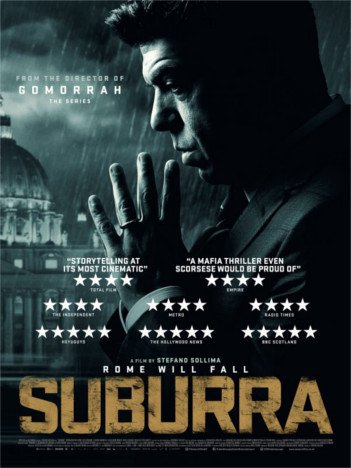 Critic for The Telegraph, Robbie Collin once wrote that if one took Roberto Rossellini’s Rome, Open City (1945), Federico Fellini’s La Dolce Vita (1960) and Paolo Sorrentino’s The Great Beauty (2013), that person could see the evolution of modern Rome on-screen. From the city’s occupation by Nazis in WWII, the “seductive, empty hedonism” of the 50s and 60s that followed, to the immense beauty but pervasive darkness of the Berlusconi era: the history of the eternal city has been well documented. Now, Stefano Sollima’s Suburra arrives and in many ways it’s a continuation of the saga of Rome. The darkness of Berlusconi’s reign, hinted within Sorrentino’s film, has now polluted the city. A tale of seedy politics and its association with criminality, Suburra takes its title from the extinct suburb of Ancient Rome. With this in mind, perhaps the film is an epitaph for the fall of Rome, the death of the old way of life.

While the plot device of interconnecting stories has been saturated to death, it works to great effect in Suburra because the tales, when combined, create a true sense of a society corrupted. The plot-threads that are real (Berlusconi and Pope Benedict XVI’s resignations) compel because the events which surround them are so shocking and hard to fathom. Meanwhile, the fictionalised stories are intriguing because they serve as allegories for problems at the heart of Italy’s capital. For instance, when Malgradi shouts “I am a member of the Republic of Italy Parliament. I can tell the D.A. to fuck off if I want” or when he urinates fully naked off his balcony, the scathing satire of the hubris and corruption within Italy’s political system come to the forefront.

Suburra’s director, Stefano Sollima (son of renowned Italian director Sergio Sollima), in the last few years, has established himself as almost an Italian David Simon. Like The Wire, Sollima’s work thus far (A.C.A.B – All Cops Are Bastards, televisual adaptations of Romanzo Criminale and Gomorrah) has been focused on gangsterdom and how its inextricably linked to social factors and politics. This is at the heart of Suburra too, but what separates Sollima from Simon is their visual aesthetic. While Simon favours a cinema-verite grittiness to portray crime as unglamorous, Sollima does the entire opposite to similar results. With the help of his recurring collaborator and D.P Paolo Carnera, Sollima’s direction is hyper-stylised and gorgeous in order to convey what attracts people to the criminal lifestyle. This beauty is then broken by scenes of intensely graphic violence in order to shock the viewer. A scene of the Pope removing his lavish jewellery transitions to a man being eaten alive by dogs, a threesome in a glamorous hotel is followed by a man being beaten with a sledgehammer.

Although Sollima is predominately a television director, he brings a cinematic flair to proceedings. Perhaps, it’s the lavish Roman setting, but every scene within Suburra is visually striking. The night-club scenes give Nicholas Winding Refn a run for his money in terms of the use of neon while a supermarket shootout is up to the standard of action directors such as Johnnie To.

In conclusion, Suburra is a crime thriller with a brain in its head. It is a satirical, visually arresting and above all, compelling allegory for the fall of Rome. Director Stefano Sollima is slated to direct the spin-off to 2015’s brilliant Sicario. While I do not think that film needs a sequel, with Sollima at the helm I am excited.

Suburra is currently showing at Light House Cinema. Check out the trailer below.

Stephen is a film writer, journalist and podcaster. He is co-editor for the film section of HeadStuff and a writer for JOE.ie. He has also had work published in Hot Press, The Times (Ireland Edition), The Irish Sun and Film Ireland and co-hosts the HeadStuff film podcast I Know That Face. He graduated with a BA in English and Film from UCD and an MA in journalism at DCU.

OMGVIVLOLZ | A look into the world of Irish artist Viv Quinn

DICFF 2020 | Interview with Bill Watterson, director of Dave Made a Maze

I Know That Face | Interview with Paddy Slattery, writer-director of Broken Law