Hi All! It’s Ellen here. Now I know if you’re in the humour section of this website it means that you, my friend, have an interest in comedy. Would I be right in saying that? Let me know sure.

Anyway, I spoke to gas woman Ruth O’Kelly Hunter about the excellent new comedy night that she is co-running with her friend and fellow comedian Conor O’Toole. It is exactly what’s needed in Irish comedy right now, and I for one am really excited for it to kick off.

The first show is on the 19th of February, headlined by the legend that is Alison Spittle.

Right, so here’s our chat!

Hi Ruth! What kind of comedy do you enjoy, and why?

I love stand-up in general in its many different forms. People that subvert the form in unexpected ways usually release happy chemicals in my brain but then there are people who are more traditionalist in form who are also brilliant. One of the first stand-ups I watched that made me feel like stand-up itself was an enjoyable medium would have been Eddie Izzard in the 90s, I just found him so funny and unique.

For TV some of my all time favourite shows would be Monty Python, 30 Rock, Parks and Recreation, The Simpsons, Community, Rick and Morty, Anything with Vic Reeves and Bob Mortimer, Louie and a million other things.

How did you get into doing standup?

The first gig I ever did was at poetry society at college. You were supposed to read a poem. I drank a bottle of wine and did comedy instead. My next gig was about 4 years later. The night porter at the hotel I was working, Emmett O’Shaughnessy, was doing open spots at The Ha’penny and he talked to Tony Fearns and got me my first spot. Thanks Emmett!

What aspects of standup life do you enjoy, and what are you not as fond of?

I like hanging out with comedians, they’re very funny. And perhaps obviously, when a gig goes well you feel very elated and inspired to continue creating which are positive feelings. It is also nice to have a fixed outlet for writing.

I don’t like it when people/groups/stereotypes are used as a punchline in a way that is supposed to demean them and make the comedian appear superior. It’s gross and often upsetting.

How did you and Conor decide to collaborate?

I ran a comedy/music/spoken word night called ‘Kill The Winter’ with the wonderful Emily O’Callaghan who runs a lot of great gigs around Dublin. We organised it together and I hosted it and it went absolutely splendidly. I think off the back of that Conor made the judgement that I would be good at running a comedy night with him, silly Conor. He used to run a night called The Death of Comedy which was before my time but people talk about it now in hushed whispers of reverence so I guess it must have been pretty good.

Conor is part of a night called ‘The Mess Around’ which is brilliant and also on in the same venue in Workman’s so he knew the good folk who run it. He approached me and was like, ‘Hey Ruth do you wanna run a comedy night with me’ and I said yes of course because Conor is the greatest, and Workman’s is class and comedy is pretty good as well I guess.

What do you think the WCC will add to Dublin’s comedy scene?

Without making the comedians sound too much like groceries: I think we’ll bring consistently high quality performers with a diverse range of comedy styles. We have an open slot for the greener comedians and we have some absolutely brilliant headliners. 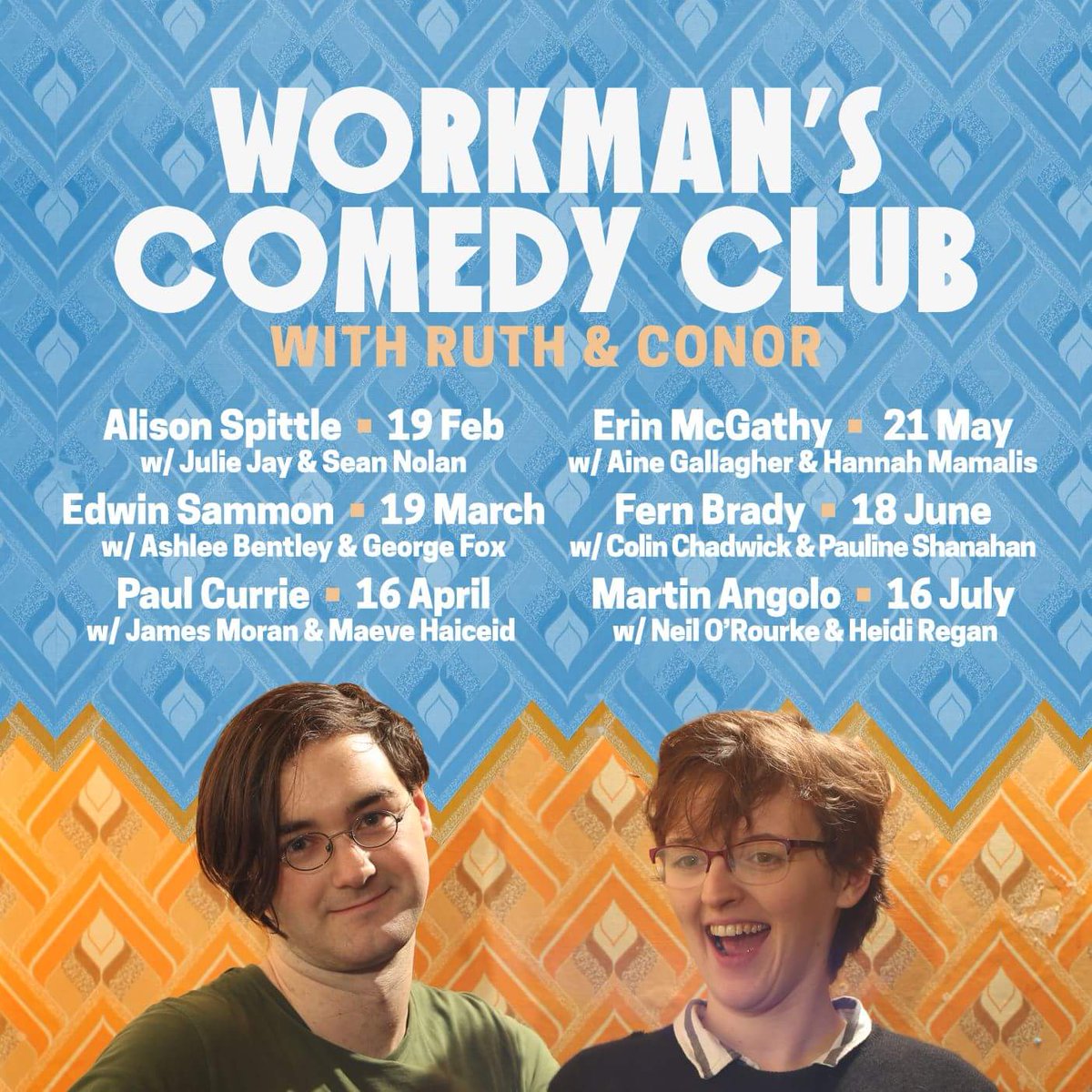 Which comedians are you most excited about doing a set at WCC?

Aahhhh! (this conveys excitement) Honestly, Ellen, they are all so good! Me and Conor booked them all together so we just asked people we knew were hilarious, or else some of them approached us. Some of the bigger names I guess are Alison Spittle, Paul Currie, Erin McGathy, Edwin Salmon, Fern Brady, which I am very excited about.

If you could pick one comedian to come and do a set at WCC, who would it be and why?

If we’re talking about someone living then Dylan Moran, Maria Bamford, Sophie Hagen, David O’Doherty, Aparna Nancherla or Tony Law are all people I love so much I would get very starstruck around them and embarrass myself a lot which is a huge incentive for them to come and perform.

What could make the Irish comedy scene better, in your view?

In general it can be difficult to get gigs consistently and some aspects of the scene can be a bit cliquey but I think that is probably true of most comedy scenes in most cities. What’s missing in Dublin is a diversity of cliques. In terms of organisers, promoters/bookers it is also a very male dominated platform, there’s nothing wrong with a good old man at the end of the day but there is room for evolution here and I believe that it is occurring as we speak, look out your window.

I think the atmosphere of some places can be a bit intimidating for some people so I really want this night to be a welcoming place where comedians can support each other and create a relaxed atmosphere, which is way more conducive to creativity and good performance, she said from her very biased perspective. This will also create a more relaxed and enjoyable experience for the audience.

Ellen is a constantly tired Emily Gilmore stan. Her favourite sweet flavour is 'any of the purple ones'. Her favourite emoji is a tossup between the nail painting one and the Easter Island head (for very different reasons). She lives in Dublin.

The Week on Twitter | Justin Trudeau, Enda Kenny, & the Grammys