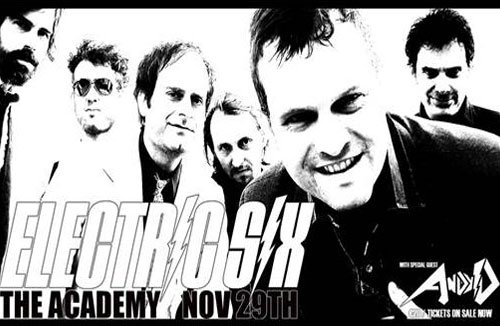 In 2003 Electric Six released an album called Fire. The next year I started college. That is to say that I made a load of new friends and went dancing about three times a week. There is no way not to dance to the singles from that album. It was huge and different and funny and exciting.

I didn’t hear much about Electric Six after that. Maybe I was aware of the release of their second album in 2005, but they lead with a cover of Radio Ga Ga by Queen, and so maybe it didn’t catch people’s imaginations in quite the same way. I didn’t know this, but aside from 2012, my first year in college was the only year that Electric Six didn’t release a new album. That’s a very high work rate. They may not be as popular as their earlier work, but they’re still doing their thing, which means they’re basically the Woody Allen of music.

And here’s the other thing: They’re playing in The Academy in Dublin on Saturday 29th of November! I’m not quite as nimble or as excitable as I was when I was eighteen… but this could still be a mega laugh. They are famed for their high-energy and excellent live performances, so they’re more than likely worth a look, and you never know, it could be the funnest gig of the year.