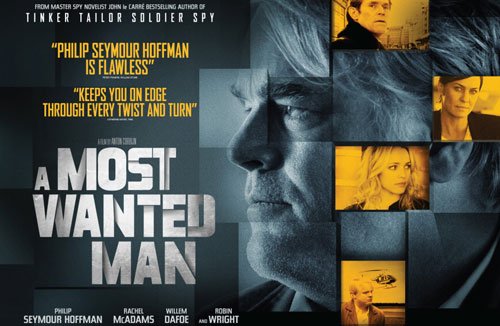 A Most Wanted Man is Philip Seymour Hoffman’s last major performance and is an ode to his immense capacity as a character actor, once again Hoffman reveals his obsessive dedication to his craft, and it is sad knowing now how this dedication was something that tortured him also and played a part in his downfall.

Adapted from a John Le Carré novel the movie is set in Hamburg post 9/11, the city where Mohamed Atta lived prior to the attack on the Twin Towers. Hoffman plays the role of a cunning German investigator, Günter Bachmann. Bachmann is portrayed as a downtrodden, flawed man with his sloppy appearance, chain smoking and his tendencies towards alcohol. Despite these flaws, the spy and his small team have their finger on the pulse of any small disturbance in the city, monitoring any threat of terrorist activity.

One of these disturbances arrives in the form of Issa Kapov (Grigoriy Dobrygin), a Chechnyan Refugee and devout Muslim. Having spent time in prisons in Russia and Turkey, the frightened and traumatised Kapov has entered the country with nothing but a letter to prove his identity. This letter details his right to a vast inheritance from his corrupt father and gives the name of a German banker, Tommy Brue (Willem Dafoe).

Kapov is given refuge in the home of a young Muslim man and his mother. These good Samaritans seek the counsel of their own lawyer, Annabel Richter (Rachel McAdam) who contacts Brue and asks him to meet Kapov and to read his letter. It appears that Brue’s father was implicated in the corrupt transfer of the elder Kapov’s money to his bank in Germany. Kapov insists he doesn’t want the money, he wishes only for asylum and to live an honest life. Bachmann’s investigation into possible terrorist activity now transforms into an effort to help Richter and Kapov.

This is part of the problem with this film. It is never clear of its purpose. What began with an investigation into possible terrorism is now something entirely different. Of course, the Americans intervene at this point. They march in wearing conservative suits and they have meetings in chrome board rooms with chrome desks and have faces made of chrome- because they are more than likely robots.

Robyn Wright plays a CIA drone and we don’t know yet if she wants to help Bachmann, or ruin him. Dr Faisel Abdullah is a Muslim academic who may have links to Muslim terrorist organisations, he may take Kapov’s money and channel some of it into a shipping company that funds terrorist arms, but this doesn’t take huge precedence until the last twenty minutes of the film.

This vague assembly of characters have no real significance and weaken a film that is already rather unsure of itself. This is not a seamless production, it jumps around a lot and it has no focus. Whether this was the error of director Anton Corbijn, or of screen writer Andrew Bovell who has come up with ‘edgy’ lines such as ‘Trying to make the world a safer place, isn’t that enough?’ I’m pretty sure he treated himself to an ice cream cone after that one.

The last ten minutes are relatively gripping, but in fairness, relatively gripping doesn’t inspire much excitement. What was probably meant to depict hopelessness and betrayal lost itself on the way to the closing scene. This film attempts to portray frightened people implicated in things that they are too small to control. Despite this integrity, the film lacks any real depth, and is merely a retelling of stories we have seen before.

The thing I felt most affected and moved by, was Hoffmann’s performance. What we see here is the actor’s desperation. The representation of the emotions he must have been feeling towards the end of his life. These final moments of the film are poignant, because we feel for a man coming to his end. I saw Hoffman’s desperate sadness in the portrayal of a character that fights and loses, just as he did in life.