Marriage Equality NI: It’s Only a Matter of Time

“…We just always figured getting married would never be an option. We are delighted and slightly saddened at the same time. Delighted that we were able to do it, but saddened that when we cross the border back into our home country, it’s not recognised as a marriage.”

That’s what Tony Day told Scottish LGBT publication KaleidoScot on the day of his wedding. He and his partner of six years, Darren, made the short trip from Antrim to Monaghan a few weeks ago when the marriage equality bill was finally signed into law, and the legislation became a reality. Tony and Darren were one of the first gay couples to get married in Ireland, and yet, their marriage remains unrecognised in their own home.

Northern Ireland is the only country in the United Kingdom where same sex marriage has not yet been legalised. Following the success of May 22nd down South, all those nice people up North who also believe that anyone should be able to marry whoever they like began lobbying members of parliament. As the months passed, campaigns like Yes Equality NI and Fight4Equality gained momentum as more people became involved, more rallies were organised, and more politicians realised that marriage equality was a fundamental inevitability.

Alliance MLA Trevor Lunn, who previously opposed the North’s push for same sex marriage, recently declared that the Assembly debates he had been hearing over the past few months had convinced him to change his mind. Speaking to the Belfast Telegraph, Lunn stated that it was not viable to claim to support the LBGT community while simultaneously denying their right to marry. “The argument that this change will devalue marriage as we currently know it does not resonate with me,” he said. “I will be voting in future, starting today, in favour of change, to bring us into line with the UK and Ireland.”

Lunn is not the only Member of Assembly to make the imperative cross over to the right side of history. Over the past few years, the Assembly has held five votes regarding the legalisation of same sex marriage, and each time the margins against the motion have been narrower and narrower. On November 2nd, it seemed like the North’s fight for marriage equality had finally been won when the Assembly voted in favour of the legislative changes, 53 votes to 52. That was, until, the Democratic Unionists decided to announce a ‘petition of concern,’ veto any progressive changes to the law, and ultimately piss off a lot of people.

A petition of concern can be used by 30 or more MLAs if they have reason to believe that a certain law is not serving the interest of a minority group, or garnering enough cross-community support. It was designed in 1998 so that no one group could hold a monopoly in the Assembly, and to ensure that power-sharing became an achievable reality. Traditionally, the petition has been – and should be – used for things like decisions regarding the constitution under the Good Friday Agreement, issues of commemoration, culture, and nationalism, and anything else with the potential to trigger a cultural divide.[pullquote]On November 2nd, it seemed like the North’s fight for marriage equality had finally been won. That was, until, the Democratic Unionists decided to announce a ‘petition of concern,’ veto any progressive changes to the law, and ultimately piss off a lot of people.[/pullquote]

In the past, the petition has been predominantly abused by members of the two most powerful parties in the North – the DUP and Sinn Féin. In this case, it is the former who have elected to exploit the petition to suit their own conservative agendas. According to DUP Councillor and Deputy Mayor of Derry and Strabane Thomas Kerrigan, members of the Northern Irish LGBT community have “gone astray,” gotten “carried away,” and should turn their attention to our Almighty Lord and Saviour to “cure a lot of these problems.”

Naturally, the Councillor’s homophobic rant received a fair few complaints from the good people of Derry, who condemned his tasteless claims as cheap and offensive. The Rainbow Project’s Malachai O’Hara expressed his disappointment to the Derry Journal last month.

It is ill-informed nonsense (…) This is a man who is Deputy Mayor and Derry and Strabane and is expected to act as a representative of everybody, including LGBT people… (It) is extremely damaging.

Kerrigan refused to apologise for his comments, and justified them by reminding us all that Eve was created from Adam’s rib, woman was “made for man,” and that The Word of God can save just about anyone.

While DUP members’ insistent need to conflate human rights issues with religion has triggered an adverse reaction from almost everybody involved in the marriage equality campaign, the party’s actions have only further exposed the glaring contradictions inherent in those opposing change. The Democratic Unionists may claim to be using the petition of concern to protect minorities, when they are, in fact, infringing upon the rights of one of the most distinctly recognisable minority groups in the country – the LGBT community.

Just as the lovely Iona Institute insisted that a child needs its mother, marriage cannot ever be redefined, and that progression is evil, so are the DUP positioning themselves firmly in the dark ages where men are men, women are women, and the two are destined to be sexually attracted to one another until the end of time. The only difference is that members of the Iona Institute only got one vote in the referendum… And that vote did not have the power to block an entire law. 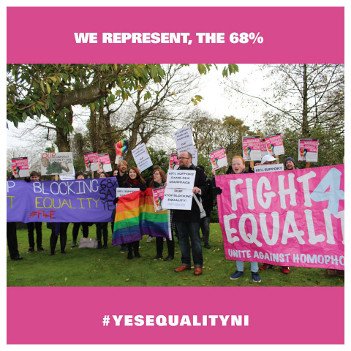 Regardless, those favouring marriage equality in Northern Ireland have deemed the Assembly’s latest vote a ‘symbolic victory.’ Recent polls show that 68% of the public support the proposed legislative changes, and it is the voices of that 68% that Yes Equality campaigners are ensuring are heard.

“It is true that the DUP (…) are now ignoring the will of the Assembly and the people of Northern Ireland,” said John O’Doherty, Director of the Rainbow Project, “but we will not allow them to dampen our joy. (The campaign) will not end until marriage equality is a reality for everyone in Northern Ireland.”

Ten years ago, Northern Ireland were the first country in the UK to introduce civil partnerships for gay couples. Just a few days ago, the Belfast High Court made a judgment regarding the liberalisation of the country’s abortion legislation. Just as it is in Ireland, the fight for equality is still ongoing, but it is not an impossibility.

Out of the 19 countries that have legalised same sex marriage in the world, 13 of them are in Europe. Despite opposition, Northern Ireland will be the next to add itself to that list. It’s only a matter of time.