Western Media and the Dehumanisation of Refugees

The Daily Mail recently published an ‘article’ detailing the living conditions of the 3,000 or so refugees living in what they called “The Calais Jungle.” To be honest, I didn’t make it past the headline – and I probably didn’t need to. We all know how generally disrespectful the Daily Mail is. We’re all aware of how completely ignorant it can be when concerned with issues of… Oh, just about anything really. Evidently, their recent reporting on the plight of those trying to cross from France to Britain has been approached in true Daily Mail style – by being insulting, racist, and not actually concerned with the plight of anybody (except maybe those of us who struggle to read it). But they haven’t been the only mainstream news outlet discriminating against refugees from all over the world. Lately, it seems a lot of publications are under the impression that it’s actually okay to be actively involved in such overt dehumanisation. 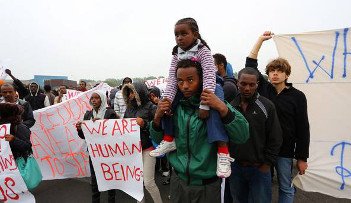 The Eurotunnel port in Calais has been all over the news recently – and rightly so. For years, migrants have been fleeing their homes in countries all over the world, and settling in makeshift camps in Calais. Every day, more people arrive to the site, and await their chance to cross the Channel tunnel to the UK. Last week, the Calais discussion reached a high, as it was reported that 2,000 refugees tried to enter the tunnel at once. However, the coverage of this event has raised more questions about Western media’s attitudes towards those who migrate, than it has about the actions of the refugeesthemselves.

Go onto Google. Type ‘migrants’ and ‘Eurotunnel’ into the search bar. You’ll get a lot of articles from a lot of different publications. They may all be covering the same event, but what really unites them is their superfluous use of dehumanising language. “Some 2,000 migrants try to storm Channel tunnel terminal,” says one. “Migrants causing delays at Channel tunnel,” reads another. One site actually decided to go with “Migrants still trying to smuggle themselves in Britain.” It’s almost as if they’re talking about a pack of cheap cigars, or some weird exotic plant, instead of, y’know, people. 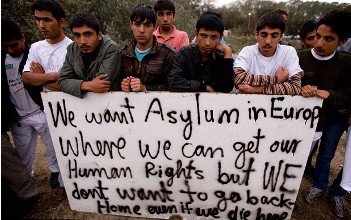 Last week, British Home Secretary Teresa May issued a warning of sorts against those attempting to travel to the UK. Writing in the Telegraph, May, along with France’s Home Secretary Bernard Cazeneuve, attempted to deter refugees in Calais from completing their journey, by claiming that “our streets are not paved with gold.” Although May and Cazeneuve began their article by stating that the ‘migrant crisis’ lay in the fact that thousands of individuals are risking their lives “- resulting in serious injuries and tragically, deaths,” it is clear that the objective here is not to protect the lives of those seeking asylum, but to ensure that the majority of the British population remains critical of the safe travel of refugees to their country.

This has not only been achieved through suggestions that more immigrants automatically means less opportunities for those who already live in the UK, but also by providing a comprehensive list of just how much of the good British people’s taxes have already been spent on security measures in Calais alone. Apparently, last September, over £12 million pounds was used to enhance physical security around the Calais border, along with a further £1.4 million to ensure that lorries and trucks had a secure waiting area. This all sounds great doesn’t it? Spending all that money to cease refugees coming into a country that supposedly has no money to offer them? Blaming refugees for breaching secure areas that really weren’t that secure at all? Condemning their struggle for survival? Grand.

But the truly shameful realisation lies in the fact that the press’s manipulation tactics are actually working. On May’s and Cazeneuve’s article, there are almost 3,000 comments alone. Take a brief scroll through them and you’ll see the kind of rambling, racist ideologies that dominate almost every single publication concerned with refugees that exists on the internet. Unfortunately, the notion that “…these Muslims and Africans will turn Britain into a crime ridden, corrupt, sharia law, third world hellhole,” is not exclusive to the Telegraph’s article, the Eurotunnel, or even Britain itself.

This kind of rhetoric not only reduces every immigrant and refugee to a member of a so-called ‘swarm,’ but is also actively involved in the dehumanisation of thousands of people. While off-the-cuff comments may not appear to be as problematic as say, suggesting that every refugee on a fishing boat should drown, they remain as proof of a society entrenched in racial discrimination. Only a few days ago, Kelly Osbourne made the mistake of rhetorically asking “If you kick every Latino out of this country, then who is going to be cleaning your toilets, Donald Trump?” Although her statement was clearly meant to question Trump’s own racist remarks, and apparently does not reflect Osbourne’s own views, the comment perfectly represents the attitude held by a sizable chunk of the Western world. That is, that all immigrants are here for the exact same reasons: to commit crime, to exploit our benefit schemes, and to do the jobs that we won’t do.

Britain’s streets may not be paved with gold, but there’s no doubt that the long journey from Calais is dominated by institutional racism, discrimination, and those millions of pounds the British government spent on boarder restrictions last year. Oddly, the notion that refugees have fled their own homes is unthinkable. Strangely, it’s more acceptable to presume immigrants are here to steal jobs, not to save their own lives. For some reason, a large portion of the Western world can’t seem to grasp the fact that refugees are people too. Really, it’s not that difficult a concept.

Anatomy of a Soundtrack | The Untouchables (1987) – Ennio Morricone

10 Reasons why I Also Hate My Boat

The Week on Twitter | Mariah Carey, Charles Manson, and the Alt-right