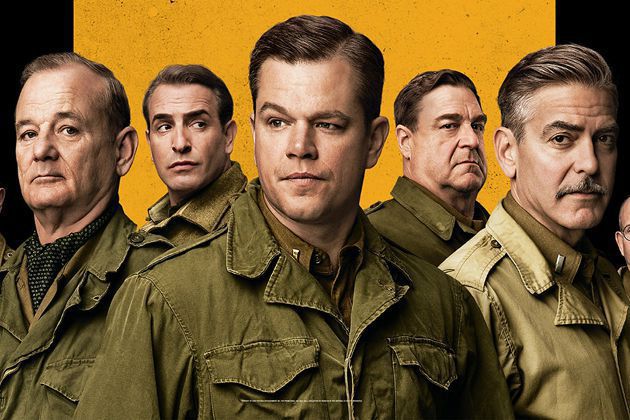 If you hear about The Monuments Men and you are hoping to submerge yourself in a harrowing and brutal insight into the devastating realities of World War II, then you should probably sit this one out.

I like George Clooney. Not only is he a really tasty dish, he is also an insightful producer who has created some really thought provoking productions. This is probably why I forgive him for this one.

The film is staged in the last days of World War II. The Nazis have plundered thousands of old art pieces and relics and have them hidden away in locations throughout Europe. FDR, played by a creepy silhouette shrouded in smoke, has commissioned ‘Art Curator’ Clooney and some fellow art expert buddies to go and retrieve the art.

With little to no character development and hardly any historical context, the viewer is at least expected to know that a World War II is going and that the lads need to return the stolen private art to its rightful owners, why? Well for Uncle Sam of course.

Obviously ‘old timer’ Matt Damon is on board because he and his pal George Clooney get along really well and everyone loves Bill Murray so he can come too, same goes for John Goodman and Bob Balaban, they all come along for the ride.

They also bring Hugh Bonneville -the Dad from Downton Abbey (who by the way has a drinking problem that seems to have destroyed his life and most of his relationships along the way, but enough about that) and a sexy Frenchman in the shape of Jean Dujardin because obviously, the European flourish is a nice touch.

Matt Damon goes and hangs out with Cate Blanchett in Paris for a while. Cate or ‘Marian’ is a French Spy. She worked for the Germans during the war and knows where the art has been taken. She is a bit frigid and cold at the beginning because, well, she is living through the final days of a horrific war and because her brother, a member the French Resistance has been killed in trying to retrieve the stolen art. But then she realises that she actually fancies Damon, because he really does care about returning the art. Plus, ‘it’s Paris’, so, obviously, being in Paris makes you fancy everyone.

That is how my cynical self feels about the film, but George Clooney has said that his films have always been rather cynical and very heavy and therefore he makes no apologies for the fact that this film is precisely the opposite. If we manage to bear that in mind then we are free to enjoy George and his pals talking about lost art hidden in mines while they roll maps out across tables and stare at them with concerned or puzzled expressions.

For some reason I wasn’t overwhelmed with rage at the ridiculousness of it all, even though it did seem like we were looking at these guys playing dress up and running around on a very expensive set. I think one of the reasons why they get away with this is probably because they all seem like really sound guys.

I also appreciate that this film has unearthed a story that many of us were not aware of. It has brought out a very important story within the complex history of World War II and at least in my case, it has made me want to learn a bit more about the finer details behind how this story unfolded. In fact I would encourage all of you to go discover some of the finer details, because we are definitely not shown them here, heck, most of the larger details are left out too.

There are some tokenistic sad and touching moments, as only the Americans can bring us, but I won’t ruin them for you. You’ll also guffaw a bit over Matt Damon speaking atrocious French and the dynamics between Bob Balaban and well, everyone, as he seems to annoy most of them. In all honesty, I think the people who have made this film know exactly what it is, a lovely healthy slice of the American Dream.

I would advise if you go to see this film, allow the cynicism to taper out after the first twenty minutes. In fact, leave the cynical specs at home and you can then enjoy a story that has been told in a moderately competent way and you can come out satisfied that you have gotten a broad overview of a piece of World War II history, then you should probably go and read the book.

Gravitational Lensing: Einstein Rings, Exoplanets and the Age of the Universe