The future is bright for Comic Book movies and with four major film studios vying for blockbuster payouts there are a plethora of quality titles to entice you into the cinemas in the coming years.

Last time out I looked at the full lineup for Marvel’s 2019 superhuman team the Inhumans. This time around I am looking at the last two Supermovies scheduled by the major studios; 2020’s Cyborg and Green Lantern. Both DC, both Warner Brothers.

Anyone who was not under a rock last week probably saw some mention of the ComicCon on Facebook or Twitter. One of the big news items was a brand new Batman Vs. Superman: Dawn of Justice trailer, which was awesome, and this will be the introduction (albeit a small one) for Vic Stone. 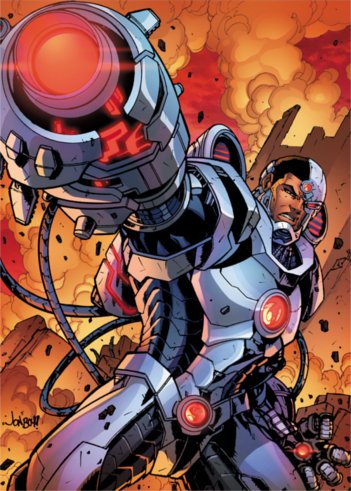 Vic Stone is the son of two S.T.A.R Labs scientists; S.T.A.R Labs have featured heavily in DC media since its introduction in the early 70s including Lois & Clark and most recently Man of Steel and The CW series The Flash. Vic’s folks were not the most caring of parents, they regularly experimented on IQ improving techniques on their son. As your typical teen angst will, Vic decided to flip the bird to his parents and concentrate on his athletics instead of his academics. He was always the rebellious type and felt ignored by his auld pair. As most comic book characters have, Vic Stone’s childhood is shaped by tragedy. Superman’s planet was destroyed, Peter Parker lost his Uncle Ben and Batman’s parents were killed. Although these hardships shape the heroes, Vic’s story differs slightly as it is the tragedy itself that is the reason for his powers.

On a trip to S.T.A.R Labs his parents happened to be working on some inter-dimensional gateway when a gelatinous monster appeared and killed his mother. The same bastard blob then turned his attention to Vic and mutilated the teenager. Silas, Vic’s father, managed to return the monster to its dimension and rushed Vic to one of his labs. Deciding to take every measure to ensure he does not lose his son as well as his wife, Silas uses the technology at hand to create Cyborg (although he was just trying to safe his son’s life).

Vic was not too happy about this and in fact wished that he had just let him die. This is some heavy shit for DC to deal with and it takes Vic a while to come to terms with his new body. 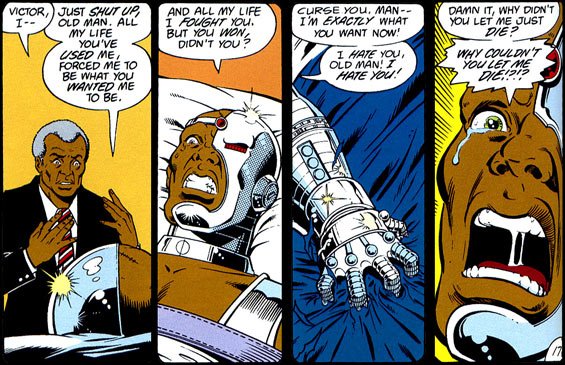 Cyborg is best known for his role in Teen Titans but has been a member of the Justice League since their New 52 relaunch in 2011. This is the Justice League we will be introduced to over the next five years; Superman, Batman, Wonder Woman, Aquaman, The Flash and Cyborg himself. Cyborg, although probably the least known of the Justice League lineup, will contribute a lot to the team. Not only does his cybernetic modifications increase his strength and speed but Vic now also has the power to tap into any computer and has integrated weapons in his suit.

April 3rd, 2020 will see Ray Fisher portray Cyborg in his solo flick but we will see him on the silver screen next year as a minor character in Batman Vs. Superman and also in the Justice League films of 2017 & 2019. Fisher has literally no chops worth talking about in Hollywood but he is an accomplished stage actor and went through a hefty audition process. Snyder and Warner obviously saw something special in the young actor.

Thankfully I didn’t write up this piece before last week’s San Diego ComicCon because we just got some big news. What was originally thought to be a one-lantern stand alone film will now be about the Universe’s police force known as the Green Lantern Corps. Anyone familiar with the comics or the awful Ryan Reynolds film, will know that there are more than one Green Lantern. The popular earth-based lanterns, Hal Jordan and John Stewart could feature in the lead up shared DC Universe movies (DCU) and the intergalactic police caper in 2020.

The Green Lantern Corps movie has a massive 7200 lanterns to pick from and we are sure to have seen at least one or two before hand. They police 3600 sectors of the universe in pairs and each have a special ‘power ring’ granting them superhuman/superalien abilities. No one has been set to play any of the lanterns as of yet but two names have been thrown about; Chris Pine and Tyrese Gibson. One would assume that Pine would be Hal Jordan and Gibson would portray Stewart. If one or both of these rumours have any merit they could be great castings. Pine has had some great roles and in the past few years especially the latest Star Trek re-make. Gibson has been part of one of the biggest money making franchises with Fast and Furious and will certainly bring in the crowds again if he is cast in the role of Stewart.

Green Lantern Corps is set to hit the cinema on June 19th 2020 and we will just have to wait and see who utters the famous oath: In brightest day, in blackest night, No evil shall escape my sight. Let those who worship evil’s might, Beware my power… Green Lantern’s Light!

So that’s it. That is all the scheduled Supermovies, and this has been your guide for the next five years. So what’s next?

Well there are plenty of rumours and possible adaptations for future films. There will be a constant flow of trailer and castings and directors and writers being attached to the films we have covered over the last ten articles. This is not the end, it is only the beginning (or some other comic-esque cheese we all love so much).

Supermovies News: From the Internet Bullpen to You | 6 | [Featuring Batman V Superman…

Supermovies News: From the Internet Bullpen to You | 5 | [Featuring The Walking Dead…