With the year coming to an end, here are the 5 top art news stories that stuck with me in 2015.

1. Record-Breaking Year for Ridiculous Amount of Money Spent on Art

Italian painter Amedeo Modigliani’s series of ‘reclining nudes’ first made news during the artist’s only solo show in 1917. Apparently, the depiction of relaxing naked ladies was deemed so scandalous that the Paris exhibition had to be temporarily closed on its opening day, and the paintings removed from the gallery’s front windows.[1] This year, one of those same paintings entered the spotlight again at an auction at  Christie’s in New York. On November 9th, Modigliani’s Nu couché had a starting bid of $75 million, and topped out at a staggering $170 million. $170,000,000.00. However, this comes in second for “highest price to be paid for a work of art in auction,” falling only behind Picasso’s Les Femmes d’Alger (Version “O”), (which also depicts naked ladies, but more Picasso-y).  The Picasso sold for $180 million at the same auction-house this past May.

Although the new owner of the Picasso chose to remain anonymous, the Modigliani went to Chinese billionaire, Liu Yiqian. Liu, along with his wife owns two well-known private art museums in Shanghai, and recently seems to be on a spending spree. Just last year, the art collector caused a bit of an uproar when he spent $36 million on a 500-year-old porcelain cup previously belonging to a Qing Dynasty emperor… only to drink tea out of it shortly after.[2] Liu, who was previously a taxi driver, made his fortune trading stocks and now likes to surround himself with many of the world’s priciest treasures, seemingly, because he can.

2. Paintings to be “Seen” through Touch

The Unseen Art Project is a crowd-funding campaign aiming to make famous paintings accessible to the blind and visually impaired. “There are many people in the world who have heard of classical artworks their whole lives but are unable to see them,” says the project’s creator, Marc Dillon.[3]  With the use of 3D printers, Dillon hopes to bring iconic paintings like the Mona Lisa into the minds of those who cannot see, through touch. As the project grows he hopes to create an online archive of 3D data for paintings, where artists from around the world could contribute to the database. This would allow these works of art to be downloaded and recreated by anyone with access to a 3D printer. 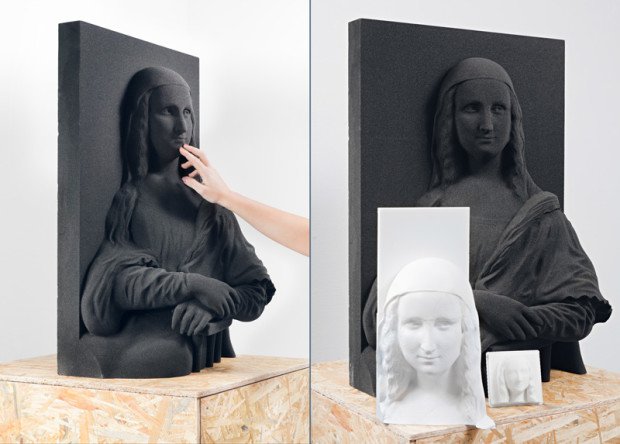 3. Margaret Keane Gets Her Own Movie

Margaret Keane was one of the most commercially successful American artists of the 1960s, thanks to her stylised, doe-eyed portraits. Unfortunately, all the fame, money, and credit went to her husband Walter. Shy and uninterested by the business aspect of the art world, Margaret gladly allowed Walter to handle the sales, and he took full advantage of the opportunity to pawn the work off as his own. By the time Margaret realised, Walter had already built up a reputation with serious buyers, and he convinced her to go along with the lie for fear of being sued. As the deception continued and their success grew, he even threatened her with death if she ever told.

Big Eyes is the biographical film about the artist and her struggle to gain proper credit for her years of work. (Yes it was technically released on Christmas 2014, but it was in theatres in 2015 so it counts.) The film stars Amy Adams and Christoph Waltz, and is directed by Tim Burton, who proves that once in a while he can produce a very real and down-to-earth film, without Johnny Depp. I’m just pleased to see the true story behind these paintings hit the big screen. Margaret Keane herself even has a cameo, as the “little old lady sitting on a park bench.”[4]

4. Women Gets Stabbed at Art Convention

An argument between two women at the At Art Basel Miami Beach ended when one stabbed her opponent with an X-Acto knife in the neck and shoulder. The incident occurred near an installation titled, “The Swamp of Saggitarius” which involved predicting the futures of convention-goers using astrology, yet surprisingly, no one saw this coming. Luckily the attacker was quickly subdued and the victim’s injuries were non-life threatening. While being put under arrest, the attacker proudly admitted her intent, stating “I had to kill her and two more!”[5] (And people say art shows are uneventful.) Despite the considerable amount of blood, the police tape, and the poor girl being carried away on a stretcher, many of the other art-goers were not immediately alarmed by the incident. Confused about the nature of the stabbing, many attendees assumed the ‘live performance’ was part of an installation.

5. All Systems Go for George Lucas Museum of Narrative Art

Back in June 2014, George Lucas announced his plan to build a Museum in Chicago, but was met with resilience as the details were unveiled. Debate began over the proposed location of the building, which would interfere with the lakeside property of Lake Michigan, as well as the parking spaces for Soldier Field, home of the Chicago Bears football team. After a full year of negotiations, the city council has decided to approve the zoning permit, making Chicago the new home of the George Lucas Museum of Narrative Art.

The building, designed by MAD Architects, looks so space-aged it could easily fit into the backdrop of a Star Wars film. The museum will host traveling exhibitions, workshops, and lectures, while its three auditoriums will house local film festivals, show sneak previews, and provide regular screenings of archival films. However the Museum of Narrative Art is not about film, but all art which tells a story. Entire sections will be dedicated to illustrations, comics, photography, pin-up art, and digital artwork. It will also display Mr. Lucas’ personal collection of Norman Rockwell paintings, and of course his film memorabilia. Film and art nerds alike will rejoice as construction begins in 2016, with plans of opening in 2018.

Delaney Davis is a Fine Arts graduate from Reno, Nevada. She currently lives in Dublin where she paints, writes, and drinks excessive amounts of tea. She is a freelance artist and visual editor of HeadStuff.org.

Interview with Eoin Francis McCormack: The Artist as a Craftsperson